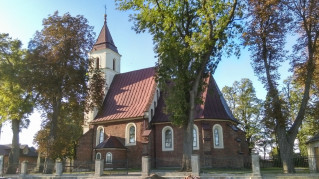 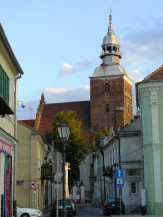 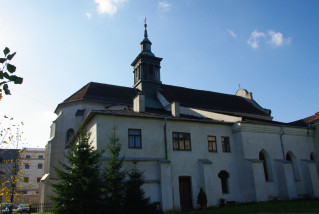 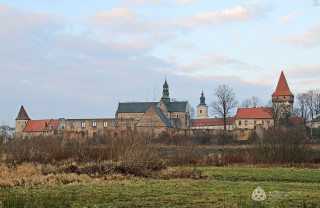 In 1176, Casimir the Just allocated land in Sulejów to the Cistercians who arrived from Marimond in Burgundy. During the 1st quarter of the 13th century the church was erected (in 1232 construction was completed and the church was consecrated); the body of the church retains its original shape to this day. The church of the Virgin Mary and St Thomas Becket is a three-nave basilica with a transept and a rectangular chancel, oriented towards the east. The junction of the nave and the transept is accentuated by a Baroque steeple perched atop the roof of the church. The naves of the church are covered by cross-rib vaulting, the vault in the chancel originating from the 19th century. The main entrance forms part of the western façade. The main portal, dating back to c. 1230, follows a characteristic stepped shape, featuring a series of columns topped with decorative capitals and crowned with a semi-circular tympanum. A rose window is positioned above the portal assembly, its tracery partially preserved. The façade is crowned with a triangular gable. The interior fittings of the church include four Early Baroque side altars of black marble and alabaster, a pipe organ casing featuring intricate carved wooden decorations, dating back to the 3rd quarter of the 17th century, as well as the wooden main altar, four side altars, pulpit, choir stalls and confessionals, all of them founded in the 18th century.

During the 13th century a monastery was erected south of the church, with parts of its eastern wing surviving to this day. The surviving chapter house is a work of architecture perfectly exemplifying the former importance of the abbey, featuring a vault supported by a single column with a lavishly decorated capital.

In the wake of destruction brought about by Tatar incursions (in 1259 and 1431) the monastery was adapted for defence purposes. To this day, the fortifications form a picturesque ensemble of shapes, their reflections dancing in the waters of the Pilica river. Today, the surviving sections of the curtain wall, from 32 to 46 metres in length and up to 4 metres high as well as fortified towers (the Moorish Tower, the Attic Tower, the Abbot Tower and the Music Tower) and gatehouses (the Tower of Chivalry and the Tower of Cracow) - plus the arsenal building - are all that remains of the fortification system. In the western corner of the complex, the wall was embedded into the adjoining utility buildings, and in the norther part - into buildings which were partially reconstructed and converted into a hotel in the 1970s.

The fact that the monks chose to keep their distance from the hustle and bustle of everyday life did not mean that they were completely isolated. It was here that, in 1318, the dignitaries who asked the pope to allow for the coronation of Władysław the Elbow-high have gathered and it was here that in 1410 Władysław Jagiełło prayed for good fortune in the war against the Teutonic Order. During the 16th century, papal nuncios would stop over at the monastery, which has thus come to be regarded as their informal residence. In the 17th century the abbot’s palace was built, surrounded by newly established Italian-style gardens. The church was seriously damaged by fire on a number of occasions, including the years 1790 and 1849. It was reconstructed in years 1852-1861. The monastery fell into decline after secularisation in 1819. Parts of the buildings became the property of the parish, while other parts were sold to private individuals. In 1891, the erstwhile parson ordered the wings of the monastery to be torn down, leaving them in a state of ruin. In the former arsenal, a school was established. The Cistercians returned to Sulejów in 1986. Today, the monastery houses a common priory, occupied by Cistercians from Wąchock.

The monastery in Sulejów is one of the most precious Polish historic buildings, a place of an immense artistic, historic and research value, featuring a uniquely authentic historical substance and forming an original, unaltered cultural environment. It is the only fortified abbey which survives in the Polish territory which still retains many of its original, well-preserved fortifications dating back to the late Middle Ages. The monastery church is particularly valuable in artistic terms as it is an example of a building whose construction spanned two different epochs in the history of art, incorporating both the excellent Late Romanesque architectural detailing and sculptures as well as elements of the Early Gothic style, including the use of cross-rib vaulting. 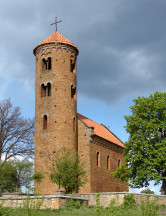 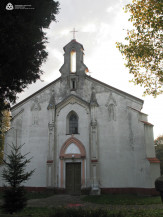 The parish church of St Michael the Archangel
Inowłódz

An example of a sacred late-Gothic building, transformed in the 19th century.

The church was build in approx. 1520, replacing an earlier (wooden) one. The date is shown on the front façade. The question who was the founder remains problematic. Some sources give the name Drzewiecki, but authors of the most recent studies are more inclined towards the Strykowski family. The latter theory is confirmed by, inter alia, Jastrzębiec coat of arms of the Strykowski family, placed on the late-Gothic church doors. The church was used by the town residents.

In the end of the 19th century, the church was converted and lost its original, late-Gothic appearance. The building was also damaged during the war. Blowing up of the bridge located nearby caused numerous cracks in the walls in which - according to local stories - a number of projectiles from the World War I were stuck.

The church is located in the centre of Inowłodz. It was built on the bank of the river Pilica, near the route from Łódź to Opoczno. It is made of sandstone and, partially, brick, and both its internal and external walls are plastered. It is an oriented, single-nave building with a narrower chancel with a polygonal end section (the chancel is lower than the nave). From the north, a tower adjoins the main body of the church, and the chancel is flanked by sacristies from both sides. The interiors of the nave and chancel are covered with wooden flat ceilings, and over sacristies, there are barrel and groin vaults. The roof truss and roof were replaced a number of times, they are made of wood. The gable roofs are covered with sheet metal. The bell tower is topped with a tented roof, also covered with sheet metal.

The main entrance to the church is positioned in the western façade. It is decorated with a neo-Gothic portal. The façade is topped with an open-work turret with a crucifix. The wall is supported by two oblique buttresses. Walls of remaining façades are also buttressed. In the northern façade, a two-storey bell tower is the characteristic element.

In its northern wall, there is door leading to the church. The entrance is accentuated by a portal over which there is a rosette with date 1520 - the year of construction of the church.

Church interior fittings are quite modest. The neo-Baroque main altar frames a copy of a miraculous image of Our Lady of Sorrows, painted in the 16th century and decorated with a 17th-century dress. The original painting was stolen in 2000.

There are also two neo-Baroque altars in the church, made in the workshop of A. Urbanowski from Łódź.

The old sacristy adjoining the chancel from the north can be reached through a 16-century cast doors with Jastrzębiec coat of arms. The oldest element of the fittings is a late-Gothic baptismal font. An interesting element is also the grave slab of Jeremiasz Barbariga, Metropolitan of Naxos and Paros. He was a Greek Patriarch who travelled through the woods of Spała. He was murdered near Inowłodz by bandits (1634), and his remains were buried in the church of St Michael the Archangel.

The building is accessible all year round - visiting is possible upon arrangement with the parish priest.

compiled by Anna Michalska, Regional Branch of the National Heritage Board of Poland in Łódź, 18.11.2014. 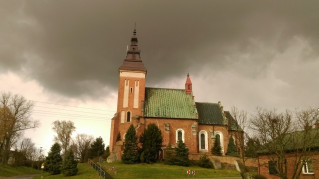 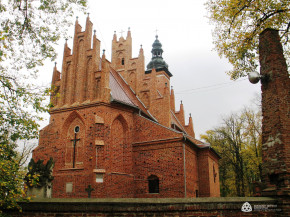 Parish church of the Nativity of the Blessed Virgin Mary
Będków

An example of Gothic architecture preserved without significant modifications.

The church was founded by the canon of Gniezno and Poznań, Piotr Spinek, together with his two brothers. It was built in 1462. In the same year, under a decree issued by Casimir IV Jagiellon, Będków was granted municipal rights. The said events were commemorated by a memorial plaque embedded in the southern wall of the church. Until 1521, the church was a filial church for the parish in Rosocha. Since the 70. of the 18th century, it has been called Sanctuary due to the cult of a painting of the Holy Mother of Będków, famous for miracles.

In the second half of the 18th century, the building was significantly redesigned. The chapel of Christ was built at that time, collapsed vaults were replaced, and the porch was extended. Also, walls in the southern part were converted into arcades. It can be assumed that the work was paid for by the new owner of Będków, bishop Jan Dębowski.

The church is located in the western part of Będków, on an oval land plot. A significant part of the area is used as a square, densely planted with trees (including old ones). The church is surrounded by a cemetery with preserved gravestones from the 19th century and a bell tower. The cemetery area is circumscribed by a brick fence. The church constitutes a dominant architectural feature over the nearby single-storey residential buildings.

Despite conversions of roofs and extension, it remained Gothic in style. It is oriented, built on a rectangular floor plan, with a narrower chancel. The interior follows an open-space layout, from the south the nave is adjoined by the former porch and the chapel of St Anne, and in the chancel section - there is a little treasury. From the north, the church is flanked by the chapel of Christ and the sacristy. The walls are made of brick (arranged in a Gothic (Polish) pattern), not plastered from the outside. Over the nave, there is a flat ceiling and a high gable roof, side rooms are covered with barrel vaults, and chapels - with stellar and groin vaults. Gabled and mono-pitched roofs are clad with roof tiles. The whole roof truss is made of wood. It is topped with a cupola covered with copper sheet.

In the front façade, there is the porch with an entrance surrounded by a stonework profiled portal, with two cartouches incorporating coats of arms. Behind the porch, there is the tower, and behind the latter - the western wall of the nave, covered with a stepped gable. Similar gables were used also in other façades. Epitaph plaques and a Gothic plaque commemorating the completion of the construction works are embedded in their walls (southern façade). Traces of former window and entrance openings have also survived. In the individual façades of the building, there are typical Gothic windows and blind window with pointed arches, as well as Baroque round windows.

In the interior, elements of fittings such as Gothic baptismal font (15th century?), main altar from the 2nd half of the 18th century with the painting of the Holy Mother of Będków (15th century), declared to be miraculous in the 18th century, are worth particular attention.

The church is open throughout the year and may be visited upon prior arrangement with the parish priest.

compiled by Anna Michalska, Regional Branch of the National Heritage Board of Poland in Łódź, 08-08-2014.

The parish church of St Michael the Archangel