The palace complex in Słomowo is particularly notable for its layout, which utilises the estate’s varied landform in a remarkably successful manner. The Classicist palace is considered to be a copy of Petit Trianon - a small château in Versaille, designed by J. A. Gabriel. The outbuilding is an interesting architectural example of converting a manor farm building into living quarters.

The French Classicist palace was built in 1904-06 according to the project of Stanisław Borecki, as an almost exact copy of Petit Trianon - a small château in Versaille, designed by J. A. Gabriel.

The outbuilding was probably built in the second half of the 19th century, together with other farm buildings in the manor farm yard. In 1905, at the time of construction of the new Turno family residence, it was rebuilt and given a fashionable appearance, due to its location on the axis of the access road leading to the palace.

The landscape park was established in the second half of the 19th century at the same time as the manor farm, however prior to the construction of the new palace building.

The Jan Turno’s residence is situated at the highest point of the park. On the western side of the palace, there is a depression which houses the manor farm complex, while on its northern side there are two manor outbuildings. The residence and the closer outbuilding are both enclosed with a joint decorative fence.

In direct vicinity of the manor farm yard, there is a gate with fragments of a brick wall and a road which leads to the palace and the outbuildings from the west. In a ravine north of the palace, there is a pond crossed by a stream; on an hill behind the pond, one can see the manor church of the Turno family (currently parish church of the Assumption of the BVM), which also serves as a tomb chapel. In the next niche, there is a small lake, overlooked by a Roman Catholic graveyard. On a flat terrain to the east of the three hills, there extend meadows and village buildings. The whole space makes for a superbly arranged architectural and landscape complex, which consciously utilises the local moraine landform.

Built on a floor plan close to a square, it has slightly differing façades with varied depth avant-corps on the axes. A brick structure, plastered, two-storey, on a high basement, topped with a pronounced cornice resting on brackets and an attic with a balustrade. Hip, butterfly roof. Rusticated plinth level. The western (front) façade has five axes, with a storied avant-corps supporting a terrace and a portico, which rests on four Corinthian, engaged, giant-order columns. On the third axis, there is a portal which features wooden, panel door, 2/3 glass, with a decorative, forged grate. Stone stairs over an circular opening lead to a terrace. The northern (side) façade has three axes and a two-storey avant-corps with four giant order pilasters. The western (side) façade has three axes, with a false avant-corps and four Corinthian pilasters. Under the ground floor windows, there are ceramic panels decorated with an egg-and-dart motif, identical to the one on the fence which surrounds the palace; at the ground floor level, there is a projecting portal which leads to the basement. Eastern garden façade follows a five-axis design, with a pronounced avant-corps, a terrace, and a giant order portico with four Corinthian pilasters and four Corinthian columns supporting a coffer ceiling. On the 2nd and 3rd axis, there are two pairs of panel doors with a transom light. External brick stairs over a large, circular decorative opening. The stairs and the terrace have balustrades with an egg-and-dart motif, on the terrace the balustrade stretches between bases of the columns, on the stairs - between decorative posts. In all of the façades, there are door and window openings in the shape of rectangles, framed by surrounds with side extensions. Preserved window and door woodwork. Ceramic column capitals, brackets, and a brick-coloured egg-and-dart.

In direct vicinity of the palace, there is a low, plastered brick fence with a ceramic balustrade featuring a egg-and-dart motif, repeated in the window sills of the palace and the outbuilding. On the front pillars, there are preserved decorative metal flower vases.

The first outbuilding is situated on the slope of the hill which houses the palace. On the western side, it neighbours a cowshed which comprises the northern frontage of the manor farm yard. On the southern side, there is the former manor house which later became the second palace outbuilding.

Built on a rectangular floor plan, single-bay, two-storey, with basements on the northern side (due to a large drop of the terrain), a wall dormer at the front, half-hip roof, mono-pitched over the upper part of the stairs. The ground floor part is built from field stone and brick, with plastered walls above it, upper part of the front façade of a wattle-and-daub structure, gallery, supports, and wooden stairs. Strongly protruding planes of the gable roof rest on decorative rafter tails. Residential (front) southern façade, 4-axis, new windows. The residential premises on the first floor can only be accessed by externals stairs connected to a gallery, which circumscribes the floor from the south and west. In the top part of the western façade, there is a visible door opening which used to allow for supervising the work of the manor farm before it was walled-up prior to 1981. On the ground floor of the eastern façade, there is an entrance leading to utility premises. The northern façade served as an utility building and was probably utilised as livestock housing. There is an interesting duality to the appearance of the external building. From the residential side, it looks like a manor outbuilding, while the side which remains invisible from the palace has a more utilitarian character.

The landscape park has a surface area of 3.26 hectares. Varied landform overgrown with 150-year old trees, including specimens of monument trees. Another notable feature is a large pond, situated in the northern part of the park, which separates the two hills which house the palace and the tomb chapel of the Turno family.

compiled by Tomasz Łuczak, Regional Branch of the National Heritage Board of Poland in Poznan, 31-10-2014. 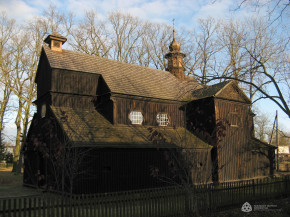 Catholic Church of the Exaltation of the Holy Cross 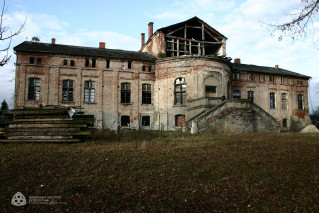 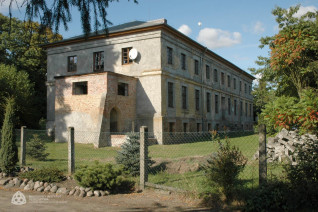 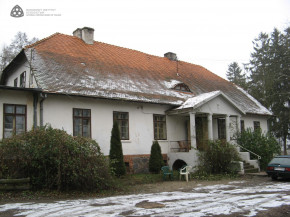 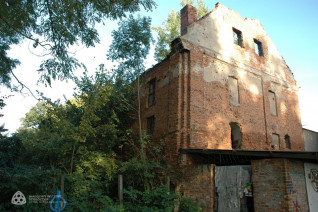 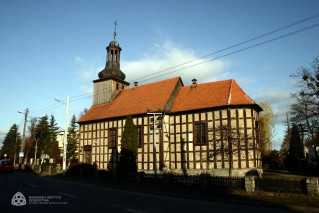 Catholic Church of the Holy Cross