Sandomierz is one of the oldest and most important towns in Poland. In the times of the Piast dynasty and the Jagiellonian dynasty, it played a significant political, economic and cultural role. It constitutes a testimony to the tangible and religious culture of the Middle Ages and the early modern period on the national scale.

For centuries, the significance of Sandomierz was strengthened in many dimensions by the collegiate church, thanks to its high position in the hierarchy of the Polish Church. The circle of the Sandomierz chapter belonged to the country’s intellectual elite and constituted many of the numerous advisers at ducal estates and royal courts. Among canons connected with the chapter were many prominent and distinguished figures with contributions towards Polish culture, including the Blessed Wincenty Kadłubek, Jarosław Skotnicki, Mikołaj Trąba, Zbigniew Oleśnicki, Jan Długosz, Marcin of Urzędów.

At the same time, Sandomierz is also a real treasury of monuments, artworks of highest significance for Polish culture and art, funded by the most important personages in the country. The historical town boasts numerous monuments of architecture, sculpture and painting. The most valuable ones include: the Gothic collegiate church (currently cathedral) funded by King Casimir the Great, decorated with Ruthenian-Byzantine frescos which are among the three preserved works of this sort created at the initiative of King Władysław Jagiełło; the nearby Gothic house of the Mansionaries, called Długosz’s House, which is one of the two surviving examples of residential buildings funded by Jan Długosz; the late-Romanesque Church of St James with a Dominican monastery - the second Dominican order in Poland, formed in Sandomierz in 1226; the urban layout of the town from the Middle Ages, with a rectangular market square and geometric road layout, surrounded with remains of town walls; one of the few surviving Gothic and Renaissance town halls in Poland; the Baroque building of the Jesuit school called Collegium Gostomianum; a former monastery of Franciscan Reformers and a former Benedictine convent.

Sandomierz also stands out due to its picturesque location at the edge of the Vistula upland, spanning across the neighbouring hills and the deep gorges which separate them, which make for a beautiful landscape.

It is known that Sandomierz was one of the main royal seats as early as in the 11th century. Gallus Anonymus described the town using the words: sedes regni principalis. In the 12th century, pursuant to the testament of King Bolesław the Wrymouth, Sandomierz became the capital of the provincial duchy, and subsequently, from the 14th century onwards - the capital of the extensive Sandomierz Province. The history of Sandomierz is marked by multiple invasions of foreign armies; however, the most tragic of all was the Tatar invasion from 1260, when - apart from the architecture being destroyed - a significant part of the population was murdered, including clerics and monks, which led to the fall of the town and the newly-established Dominican monastery becoming completely deserted. After the attack of the horde, a cult of martyrs from Sandomierz was born, in particular worship of Prior Sadok and Dominican martyrs (beatified in 1807). Anniversaries of these tragic events were cyclically commemorated by citizens of Sandomierz and pilgrims by way of indulgence services and pilgrimages, which eventually became part of the town’s life and customs. Sandomierz was restored from ruins by subsequent dukes and kings: King Bolesław V the Chaste by way of granting privileges and exempting from liabilities for the benefit of the duke; Duke Leszek II the Black by way chartering Sandomierz once again in 1286 (under Magdeburg Law) and moving the town from the Hill of St James to the neighbouring hill (Town Hill), as well as supporting the reviving Dominican order; King Władysław the Elbow-high - by funding the canonry (the so-called Canonry of the Ring of the Queen) as an expression of gratitude for political support in coming to the throne. In the mid-14th century, after the town had been ransacked by Lithuanians, the royal castle, the town hall and the town walls were erected, and in the years c. 1360-1382 King Casimir the Great funded the new collegiate church. Increased construction activity in the late Middle Ages was connected with a stronger royal initiative, as well as with the increase in wealth of Sandomierz burghers. The convenient position along the trade route leading to Ruthenia and Lithuania, as well as along the Vistula route, turned the town into a prosperous centre with thriving economic and cultural life. The growth of the Sandomierz chapter led to artistic endeavours and the strengthening of the educational centre consisting of the most prominent representatives of religious culture in the country.

The slowdown in the dynamic growth of the town is dated at the 16th century and linked with the decrease in trade and political significance at the hands compared with other towns and cities. In 1612, a fire consumed the majority of Sandomierz, including houses of vicars, among others. The Swedish invasion and destruction of the royal castle by explosion contributed towards the decline in the town’s significance, which reached the ultimate low in the 18th century when Poland was partitioned.

After 1794, Sandomierz was incorporated into the Austrian Partition, and in 1815 into the Russian Partition. In 1818, the Sandomierz diocese was established, and the collegiate church attained the status of a cathedral. In 1885, renovation of the cathedral was started with the aim of moderate restoration of the Gothic style, revealing the forgotten frescos funded by King Władysław Jagiełło. Neither Sandomierz nor the Cathedral Hill sustained damage in World War II.

However, the picturesque elevations and the distinctive panorama of the Sandomierz escarpment are endangered by erosion. The Town Hill has been witness to construction disasters connected with subsidence of the scarp and collapse of basements. In the 1960s and the 1970s, extensive restoration and protective works were carried out with the aim of strengthening the hill. Some of the basements were filled with a special mixture or had their walls reinforced, protecting against water penetration, and the high scarp was strengthened with a retaining wall sunken into the hill and trusses made of reinforced concrete. In the 1990s, piling of the Castle Hill was begun for the purpose of protecting against land subsidence and preventing damage to the walls of the royal castle.

Sandomierz is located in the valley of the Vistula river near the mouth of the San river. It is situated within the edge of the Sandomierz Upland, and its historical part (considered a monument of history) is located across three hills: the Town Hill, the Cathedral Hill, the Castle Hill, the Hill of St James (the Old Town Hill), the Hill of St Paul, and the Żmigród Hill, traversed by deep loess gorges, which include the Gorge of Queen Jadwiga and the Piszczele Gorge.

The town chartered under Magdeburg Law is situation on the Town Hill, in the central part of Sandomierz. The geometric road layout from the mid-14th century is still visible. In the centre, there is a market square with a Gothic and Renaissance town hall in the middle. The two-storey town hall with brick façades was constructed on a rectangular floor plan with a tower, with a Renaissance attic added at a later time. The town complex was originally surrounded by defensive walls, whose remains survived in the form of e.g. the Opatów Gate, short segments of incomplete height, the Dominican Gate (the so-called Eye of a Needle).

An exceptional complex of monuments can be found on the Cathedral Hill (formerly: Collegiate Hill) in the southern part of Sandomierz. The complex comprises the Cathedral (formerly a collegiate church) of the Nativity of the Blessed Virgin Mary and the neighbouring scared buildings, which are historically linked with the function of the main church: a vicarage, Długosz’s House, a suffragan, a bell tower, a former parish school (currently a rectory), the Catholic House, the former House for Retired Priests (currently the Theological Institute and the Diocesan Curia), a former canonry called “The Biretta” (currently the seat of the Ecclesiastical Court), the Bishops’ Palace, and gardens on the slopes. The buildings in the complex were constructed in the Gothic, Baroque and Historicist styles.

The cathedral is a Gothic building made of stone and brick, framed with tall external buttresses, with a three-nave, hall body, and a chancel terminating in a semi-hexagon. The west façade of the church is preceded by a Baroque porch and crowned with a Baroque gable reminiscent of the Jesuit Church of the Gesù. The inside of the church is divided with monumental inter-nave arcades and covered with painted cross-rib vaulting with decorative sculpted keystones. The walls of the chancel are covered with paintings in the Ruthenian-Byzantine style from c. 1430 depicting Marian and Christological themes. The lavish fixtures and fittings of the church (paintings, altarpieces, confessionals, choir stalls, pews, etc.) are mainly dated at the 17th century and the 18th century, and the remaining polychrome paintings at the 1930s.

The Gothic Długosz’s House (from 1476) is located to the north-east of the vicarage, situated at the edge of a slope in a garden which is enclosed with a wall. It is a two-storey building erected on the floor plan of an elongated rectangle, made of brick, unplastered, with dark burr brick decoration on the façades in a repeating rhombus pattern and stone window surrounds, covered with a dual-pitched roof with two gables decorated with pointed-arch blind windows

On the slope of the Hill of St James there is the Church of St James and a Dominican monastery. The complex was erected in the 13th century in the Late Romanesque style. The church is one of the first places of worship in Poland made of brick, and it is also the oldest monument in Sandomierz - a remnant of its pre-Magdeburg chartering. It consists of a three-nave basilica body and a rectangular chancel. On the east, the body and the chancel are covered with triangular gables with a geometric brick decoration. The north nave of the church terminates in a plastered chapel with a cupola ceiling dedicated to Martyrs of Sandomierz, which dates back to the 17th century. On the other side of the nave, there is a bell tower. Some of the particularly valuable decorations of the church include ceramic friezes featuring interlacing zoomorphic motifs and a Romanesque bipartite arcaded portal made of formed bricks, which is located in the north façade of the church. From the south, the chancel is adjoined by the east monastery wing which (as the only one) has survived to this day. 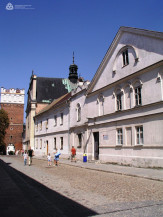 Monastery and hospital complex of the Order of the Holy Ghost, today rectoral church of the Holy Spirit and the seat of Caritas of the Diocese of Sandomierz 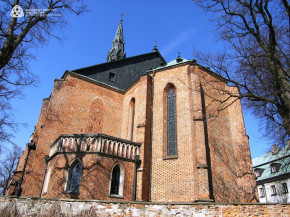 Collegiate church of the Nativity of the Blessed Virgin Mary, today the cathedral 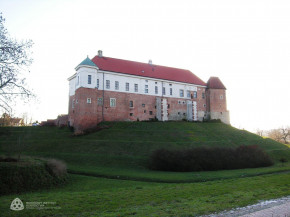 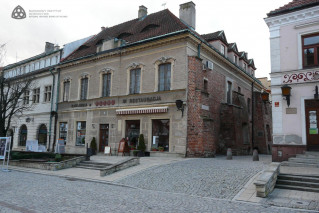 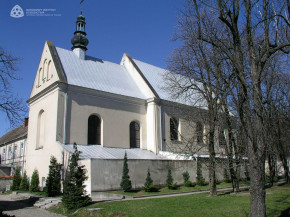 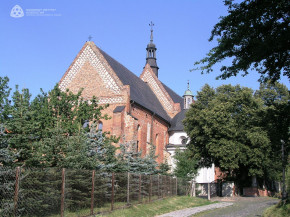 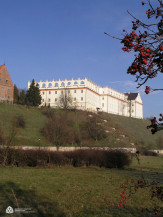 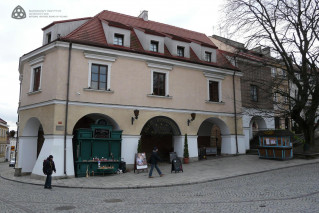 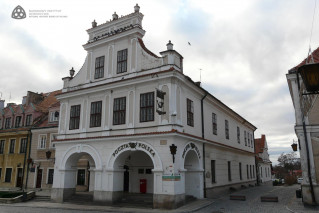