The church of St John the Baptist is one of the oldest surviving wooden churches in Upper Silesia, with the difference in height and roof pitch between the chancel and the nave being a typical feature of the architecture of the region. In addition, the building is a valuable example of a two-nave church with lavish Gothic detailing and valuable interior fixtures and fittings.

The very first mentions of the village of Poniszowice date back to the year 1245, when the village was donated to the Wrocław bishop Tomasz by Mieszko II, the duke of Opole. According to the latest dendrochronological analysis, the existing church was erected in 1498 and is believed to have been consecrated one year later. In 1570, a free-standing bell tower was erected in the immediate vicinity of the church. During the first half of the 17th century, the church remained in the hands of the Protestant community; in the years 1640-1650, the church was reclaimed by the Catholics and underwent restoration works accompanied by the addition of new altarpieces, which were consecrated in 1653 and 1657 respectively. Further changes followed in the years 1691-1692, when the chapel of St Joseph was added, with the funds for its construction being provided by Franciszek Rogojski from Słupsk. In 1775, the church underwent a comprehensive restoration and modernisation; the cloister-like walkways positioned alongside the façades, known traditionally as the soboty, were also added during that period. Important changes took place in 1844, when a new organ gallery was constructed in the western part of the nave, while in 1852 a patrons’ gallery was added above the sacristy, with the funds for its construction being provided by Aleksander Zawadzki. In 1882, the church interior received its vibrantly coloured painted decorations executed by Kusber, an artist from Gliwice. The church was renovated on numerous occasions, including in 1908, when a comprehensive restoration of the church was carried out. Six years later, the hitherto open cloister-like walkways surrounding the church received a weatherboard cladding. Another comprehensive renovation took place in 1982, while in 2010 Andrzej Marek Barski, a professional art restorer from Nysa, performed conservation works on the altarpieces. One year later, the cloister-like walkways were stripped down, dismantled and reconstructed, while the most recent works took place in 2012, when the existing foundations were replaced with a completely new structure, while the chapel was reconstructed from the ground up.

The church of St John the Baptist is situated on a small hill, in the middle of the village, at 5 Parkowa street. The building is surrounded by an old cemetery, with the entire site being circumscribed by a stone perimeter wall. The complex also included a free-standing bell tower located in the north-eastern part of the site.

A characteristic feature of this Late Gothic church is the difference in the height and pitch between the roofs above the nave and the chancel, a trait shared by other similar ecclesiastical buildings in the Upper Silesia region. The church also features surviving, original detailing from the Gothic period. The church is oriented towards the east; it was designed as a wooden log structure sitting on foundations made of stone, bound with lime mortar. The church consists of two main sections in the form of the nave, designed on a square floor plan, as well as the chancel. The northern side of the nave is adjoined by the chapel of St Joseph, with a crypt concealed directly beneath. In addition, the front and sides of the nave are surrounded by a cloister-like walkway supported by wooden posts; originally an open structure, this walkway has been subsequently converted into an enclosure through the addition of weatherboard cladding. The chancel, designed on a rectangular floor plan and featuring a semi-hexagonal end section, is adjoined by a rectangular sacristy to the north. A patrons’ gallery is positioned directly above the sacristy, at the first-floor level. A pronounced skirt roof which runs around the perimeter of the chancel serves as an additional decorative flourish, adding flair to the otherwise conventional design. The main body of the church is covered with a slender gable roof. The roof above the chancel features a similar design, albeit with a three-sided end section.

The western part of the roof is extended to accommodate the sacristy annex. The chapel of St Joseph features a five-sided roof. An octagonal steeple with a roof lantern, crowned with a bulbous cupola designed in the Baroque style, rises from the roof ridge above the middle of the nave. The main entrance is positioned in the western façade, with the northern façade being enlivened by the presence of the chapel in the middle and the sacristy at the eastern end. The cloister-like walkways, concealed beneath weatherboard cladding, adjoin the northern, eastern and southern façades. The walls above the said walkways and skirt roofs projecting from the façades are clad with wood shingles, with the exception of the chapel, which features an exposed wooden log structure instead. Small, rectangular windows protected by barbed grillwork pierce the walls of the eastern and southern façades. Inside, the church features flat ceilings adorned with simple painted decorations, with the ceilings of the chapel and sacristy featuring decorative, chamfered beams. The chancel features a rare type of false barrel vault with a five-sided base. The nave and the chancel are separated by a chancel arch wall with a rectangular aperture consisting of a pair of chamfered beams, with the upper section of the entire arrangement supported by wooden corbels. Another notable feature is the profiled, stepped cornice bearing the hallmarks of the Gothic style. Until the 1980s, the church features a highly unusual layout whereby a row of wooden posts supporting the longitudinal beam created the appearance of two separate naves. These posts, however, were subsequently removed in 1982. One should also mention that a new patrons’ gallery was added above the sacristy in 1852; the western section of the nave is occupied by an organ gallery supported by four posts, positioned above the entrance. Notable fixtures and fittings include a lavishly ornamented main altarpiece from 1655, incorporating the painting of the Virgin Mary of Częstochowa in its centre and adorned by numerous sculpted decorations, including a Pietà in bas-relief positioned in its lower section. Two Early Baroque side altarpieces also deserve a mention. The altarpiece on the right, graced by the painting of St Barbara, is believed to date back from the year 1650 and is adorned with auricular style gilt decorations typical of 17th-century altarpiece design. The altarpiece on the left incorporates the painting of the Resurrection, dating back to 1653; its layout is similar to that of both the middle and the right altarpiece. In addition, this altarpiece also features a decorative relief in its lower section.

The church complex also included a free-standing bell tower located in the south-eastern part of the site. Designed on a square floor plan, it is a simple, three-storey post-and-beam structure resting on brick foundations. The tapering walls of the bell tower are clad with weatherboards, with the third-storey belfry being designed as a slightly overhanging structure. The individual storeys are accentuated by simple skirt roofs, with the entire structure being covered with a pyramid hipped roof with an octagonal spirelet at the top.

The site is open to the general public.

compiled by Agata Mucha, Regional Branch of the National Heritage Board of Poland in Katowice, 24-09-2014. 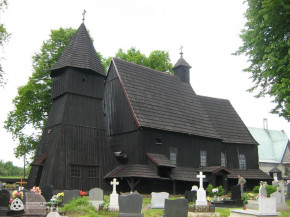 Former Parish Church of All Saints 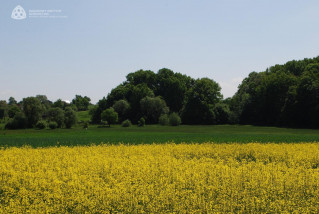 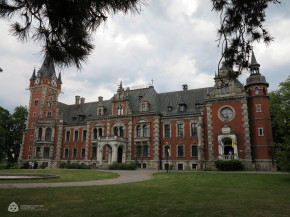 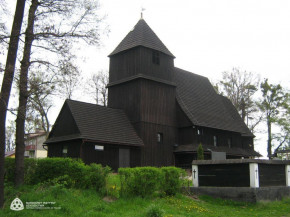 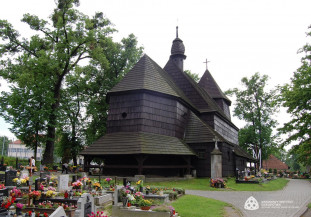 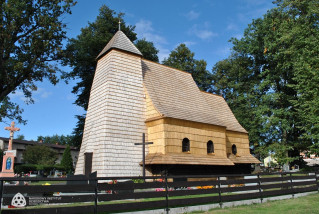 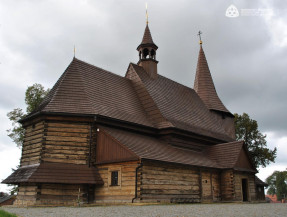 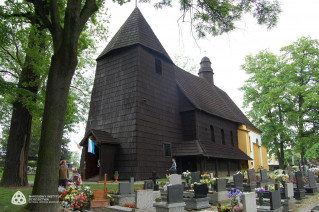 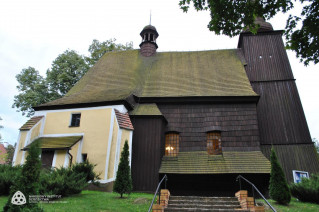