Franciscan church of Christ the King with a monastery

An example of late historicist architecture, in a simple neo-Baroque style. Interesting interior fittings. An important architectural and urban accent, designed by August Feddersen, an important character in the history of Olsztyn's architecture in the 1920s-1930s.

Franciscans came to Olsztyn in 1919 from the Silesian province of the St. Jadwiga Order of Friars Minor (Ordo Fratrum Minorum - OFM). From the beginning the seat of the Franciscans were connected with the district of Zatorze. First monastery premises and a chapel were created in a tenement house at the then Königstrasse, which is called Wojska Polskiego Avenue today. In 1926, August Feddersen, an architect working in Olsztyn, won the competition for the construction of a new church with monastery. The designs by Feddersen included, among other things, a municipal theatre (built in years 1924-1925); in the 20s and 30s, a number of public and residential buildings were erected in Olsztyn according to his designs, which contributed to a significant degree to the appearance of the city. One of them is the complex of Franciscan church and monastery. The construction was commenced on the 700th anniversary of death of St. Francis (1182-1226) The cornerstone was consecrated in August 1926 by bishop of Warmia Augustyn Bludaua (it is embedded in the eastern external wall of the chancel). Construction works were carried out by the company of Karczewski from Olsztyn. The completed church of Christ the King and St. Francis of Assisi was consecrated on 2nd of October 1927 (day before the day of commemoration of death of the order founder). Until 1932, the monastery wing was completed. The church's fittings came into being gradually, with part of them procured before its construction, and subsequent elements were added until the 1930s (pipe organ made by the company of Bruno Geobel of Königsberg, 1937). In 1946, the church was handed over to Franciscans from the Polish province of Immaculate Conception of the Blessed Virgin Mary from Cracow (known as Bernardines). In the 1960s-1990s, services of the local Greek Catholic community were also held in the church. Since 1991, the parish belongs to the province of St. Francis of Assisi in Poznań. In 1942, a field hospital was arranged in the monastery. In 1945, most monks left the monastery, escaping the Red Army. In 1954-1967, a specialised paediatric ward functioned in the building. The monastery was reclaimed by the order in 1993. In years 2004-2006, comprehensive conservation and renovation works were carried out both on external façade as well as the church's interior.

The church is located in the northern part of Olsztyn, in the Zatorze district, near a railway line. The chancel is oriented towards north-east (analogically to the oldest church of Olsztyn — Gothic parish church in St. Jacob). From the north-west, the monastery wing adjoins it, positioned perpendicularly. The church is made of brick and stone and it is plastered. Built on a rectangular floor plan, it features three naves (naves of the body and the chancel are of equal height), five bays, and a vestibule. Entrance to the vestibule is located on the western side; in the eastern section, the Chapel of Adoration is currently separated. In the first bay of the ground floor, there is a porch, and over it, a choir gallery. The side naves, are adjoined along three bays by a row of connected, shallow side chapels, built on a plan of a narrow rectangle. The last elongated bay contains a slightly elevated section of the chancel, separated from the main nave by steps with an undulating profile, and from the side naves — with lector's partitions. On the axis of the main nave, the chancel section is enclosed by a separated, rectangular altar part. The building is compact, monumental, and cuboid in shape, with symmetrical layout of masses, rhythmic and expressive accentuation of the façade with emphasised entablature running around the whole body. The building is covered by a gable roof (cemaric roof tiles); the separated altar section features a separated roof and a lower roof ridge. The body is adjoined by lower, compact rows of chapels. In the front façade, there is a giant order colonnade resting on a plinth, supporting entablature and elaborate gable. Two middle pairs of the six columns with plain shafts and composite capitals are slightly pushed together, forming three wider spaces, featuring rectangular windows on the first storey, and on the second one — niches with semicircular arches. The entablature features a simplified, plain architrave and frieze, as well as a cornice with accentuated frieze formed by projecting bricks. The gable features arch shaped side volutes and low pilasters arranged on the axis of the central column pairs. The pilasters support a triangular gable with cornice. On the axis between the pilasters, there is inscription DEUS MEUS ET OMNIA 1226-1926, and the tympanum features a cartouche with the Franciscan crest — cross between crossed arms of Jesus Christ (with visible nail marks) and St. Francis (in a habit, with a visible stigma) The whole is crowned with a cross. Other façades are accentuated by double pilasters supporting the frieze running around the building, and a pronounced cornice; the façades of chapels feature pilasters with imposts, and entablature without frieze formed by projecting bricks. On the axis of the bays, in the upper section of the walls of side naves features there are large, semi-circular windows; the chancel bay below features a wide, rectangular window. The back façade is topped with a gable analogical to the front one (without symbols of the order), and a lower gable over the altar annex. The interior is separated into naves by pillars on the plan of an elongated rectangle. The last pair of pillars is pierced by gates leading to the chancel section, with niches over the openings. The pillars are framed by Doric pilasters with entablature with a frieze formed by projecting bricks, the walls are articulated in an analogical order, entrances to side chapels are open, with arcades featuring round arches in their top sections. Over the door to the monastery wing, there is a concave and convex window. The altar section is separated by rows of corner pilasters with lavish graining. The walls and ceilings of the naves are bright, painted white, and walls of the chapels are dark red. Barrel vaults with lunettes, divided by double arches. In the vestibule and porch, there is a flat ceiling, which features rectangular coffers in the vestibule. Fittings of the church are interesting and constitute an example of 20th century sacred art inspired by experiences of academic art, Gothic art, and new art déco trends. Because of the Silesian filiation of the monastery, artists connected with this region were chosen who specialised in sacred art. The altar complex was prepared by artists from Wrocław — side altars of St. Anthony of Padua and St. Francis by Bruno Tschoetschel, a renown sculptor from Wrocław, altars of Our Lady of Perpetual Help and Christ the King — by an enterprise from Wrocław, J. Hoeptner Comp. The monumental painting Crucifixion (1930), filling the wall closing the chancel, was painted by Georg Poppe from Bardo, a graduate of the Karlsruhe academy. The monastery wing is built on a rectangular floor plan, the buildings has three storeys, is covered with a gable roof. Its front façade is plain, without accentuation; the back façade features two avant-corps, the middle one topped with a decorative gable.

Porch opened during daytime, which makes it possible to see the church's interior; the monastery is used as a religious house.

Compiled by Joanna Piotrowska, Regional Branch of the National Heritage Board of Poland in Olsztyn,13.08.2014. 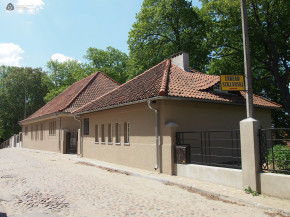 A pre-burial house of the Jewish community, currently the Centre for Inter-cultural Dialogue (MENDELSOHN'S HOUSE) along with a gardener's house and an adjacent Jewish cemetery. 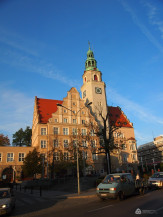 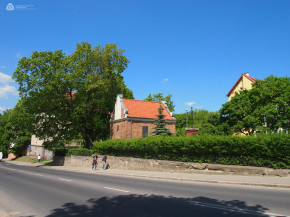 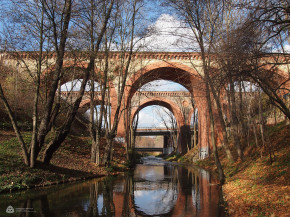 Railway bridges on the river Łyna 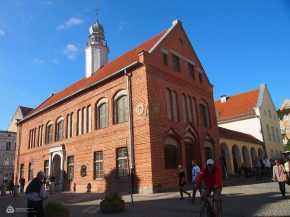 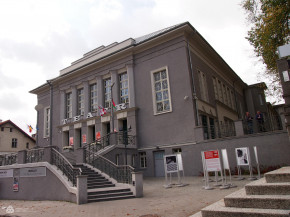 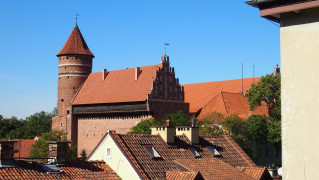 Castle of the Warmia chapter 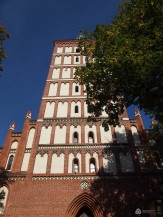