The parish church in Nowe is one of the most resplendent and largest churches in the region - an example of a skilful combination of the original, Gothic edifice and the subsequent Gothic Revival additions.

The first written mentions of the local settlement date back to 1185, with the first references to a parish priest being made in 1290. Another document, dating back to 1325, makes an express reference to the local parish. The present church was built somewhere around the mid-14th century, on the site of an earlier, wooden church. According to J. Heise, the church was erected in two stages. During the first stage, in 1366, the chancel and the sacristy accompanied by a vestibule were constructed, while the late 14th century and the early 15th century brought about the completion of the three-nave body of the church, featuring a hall layout, as well as of the tower which accompanied it. For a relatively short period in the 16th century, the church was taken over by the Evangelical community. In 1696, at the initiative of H. Rozrażewski, the bishop of Włocławek, the church was handed over to the Catholics. In the years 1733-1734, the church underwent comprehensive renovation works thanks to the continuing efforts of rev. Majewski, the local parish priest. Another renovation was carried out in 1862. In years 1910-1912, Tadeusz Bartkowski, the erstwhile parish priest, commenced the extension of the church based on the design produced by the Berlin-based architect named Baecker; the church received a new western section as well as an additional northern aisle; the existing flat ceiling above the nave and the side aisles was replaced by a vaulted ceiling, while the chancel floor level was elevated at the expense of the headstones and crypt entrances located there, which were buried beneath the new flooring. The layout of the church entrances was modified, while the side porch was also extended. The conservation of the Gothic wall paintings from the 14th-15th century, discovered during the renovation works, began in 1913. In 1930, a wall subdividing the churchyard was added.

The church, oriented towards the east, is situated in the northern part of town, on Krótka street, in the middle of the lot bordering with a Gothic defensive wall to the north, with Tylna street forming the southern boundary of the churchyard. The hall church, designed on a rectangular floor plan, was designed in the Gothic style, with Gothic Revival added or redesigned sections. The main body of the church is now a three-nave, five-bay structure, although it had started its life as a three-bay design subsequently extended through the addition of the two westernmost bays, slightly offset against the rest of the structure (years 1910-1912). The four-bay, rectangular chancel is separated from the nave by a chancel arch wall with a pointed arch, while the former south-western corner of the main body is occupied by a quadrangular tower, which currently sits at the level of the middle bay. The silhouette of the church consists of the former main body, preceded by the narrower, lower added section, and the chancel on the eastern side. The tower, positioned on the southern side of the church, remains the dominant feature thereof due to its size and majestic appearance. The individual sections of the church are covered with gable roofs and mono-pitched roofs, with all the roof surfaces being clad with monk-and-nun roof tiles. The brick edifice sits on stone foundations, its walls covered with plaster on the inside only; the interior of the church is graced by Gothic stellar vaults in the chancel and Gothic Revival vaulted ceilings in the nave section. The façades of the church are supported by buttresses which flank window openings and blind windows set into splayed, plastered reveals, above which runs a plain frieze, likewise covered with plaster. The front façade is symmetrical in design, its middle section flanked by three-stepped buttresses; the southern buttress is pierced by a pointed-arch passage positioned at a right angle towards the façade. The main entrance portal, framed with splayed, archivolt reveals, is surmounted by a blind window with a similar outline. The entire façade is crowned with a triangular gable surmounted by pinnacles and adorned with two stacked rows of blind windows. The former front gable, positioned between the original main body and the added western section, features a stepped outline, partitioned with pinnacles and rows of pointed-arch blind windows. The southern side of the gable merges with the northern wall of the tower, which had originally stood at the building’s corner and which remains the visually dominant feature of the southern façade. The four-storey tower’s walls are partitioned with cornices and blind windows topped with pointed arches, with the exception of the third storey, where the blind windows are capped with paired round arches instead. The crenellated parapet at the top of the tower provides the finishing touch. Distinctive features of the eastern façade are its decorative gables: the triangular gable of the chancel - a Late Gothic design subsequently remodelled in 1862, adorned with pinnacles and divided into several horizontal sections, each of them graced by paired engaged columns supporting arcaded friezes above - and the stepped gable rising above the main body, partially reconstructed in 1862, adorned with crenellation and pointed-arch niches incorporating paired blind windows. The interior consists of the main body, containing the nave and the two side aisles, as well as the additional, visibly lower northern aisle, which was added at a later date. The main nave and the chancel are separated by a chancel arch wall with a pointed-arch aperture, while the openings leading to the side aisles are topped with arches supported by octagonal pillars. The organ gallery is positioned at the end of the added western section of the main body. The interior décor is highly diverse in nature and offers little by way of stylistic uniformity; notable features include the remnants of Gothic wall paintings, focusing on Christological themes (including the Holy Trinity as the Throne of Grace and the Crucifixion scene with a Volto Santo [Holy Face] motif) as well as themes related to the life of the Saints, including St Helen, St Valentine, St Sebastian and St Florian. The main altarpiece and the two side altarpieces were designed in the Baroque Revival style, while the additional side altarpieces positioned along the rood arch and the pulpit bear the hallmarks of the Baroque style.

Limited access to the building. The church may be viewed from the outside; the interiors can be viewed during church service.

compiled by Bogna Derkowska-Kostkowska, Historical Monument and National Heritage Documentation and Popularisation Department of the Kuyavian-Pomeranian Cultural Centre in Bydgoszcz, 26-11-2014 - 8-12-2014. 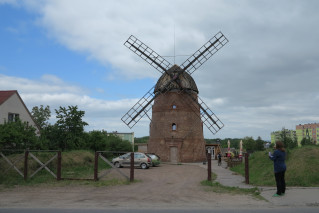 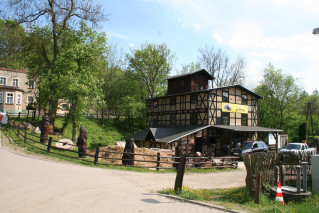 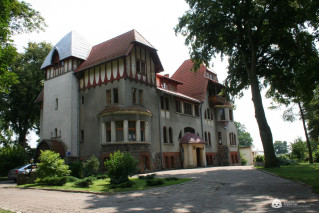 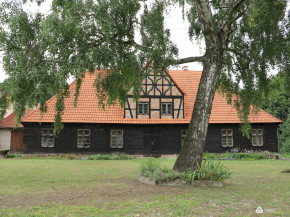 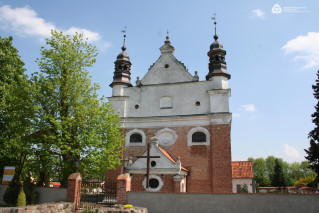 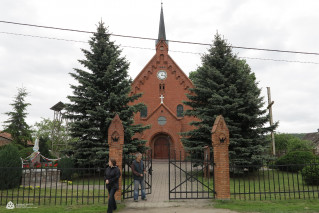 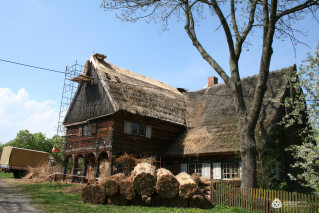