A representative, well-preserved example of an early modern manor house complex originally serving as an administrative centre of the surrounding manor. Today, the manor house presents a considerable historical value and enjoys the status of a regional landmark, mostly due to its preserved, 17th-century form and nature, with very few alterations having been made from the moment of its construction, as well as due to the presence of accompanying fortifications from the second half of the 17th century, preserved in the form of imposing earthen structures of the four corner bastions and two curtain ramparts, which were later partially levelled - most likely in the early 19th century.

The present complex was erected between the 1620s and the 1630s, replacing an earlier, wooden manor house which had once stood on this site. Originally conceived as an administrative centre of the so-called State of Łodygowice - a great manor owned by Jerzy Zbaraski, the castellan of Cracow. Before the construction was even complete, the manor was acquired by Stanisław Warszycki, the castellan of Cracow, who carried on the construction of the manor house, while in 1673 he also erected bastion fortifications around the mansion, their only remaining parts today being the imposing earthen structures of the four corner bastions and two curtain ramparts as well as remnants of the moat. The construction of the fortifications was the final stage in the process of formation of the complex, completed in the late 17th century. The complex consisted of the manor house, positioned roughly in the middle and preceded by an expansive driveway with a gate positioned on the middle axis of the building, as well as the garden to the south-west, consisting of two distinct parterres, and a number of utility buildings to the north-east. The fortifications themselves have lost significance towards the end of the 18th century, as evidenced by the decision taken in the late 18th/early 19th century to allow the gardens to encroach upon the western bastions, thereby exploiting the landscape value thereof according to the prevailing trends. In the second half of the 19th century, when the manor remained in the hands of Klementyna de Weber Primavesi, further, more substantial alteration works took place, including the Gothic Revival redesign of the manor house, the partial levelling of the earthen ramparts and the establishment of a landscape park. The exterior of the manor house was remodelled through the introduction of a Gothic Revival fractable with corner turrets crowning the central avant-corps as well as a number of pointed-arch windows. The pointed-arch motif was also carried over to the new, impressive arcaded portico preceding the avant-corps, while the side façades were now adjoined by avant-corps and latrines. During the post-war period, after the manor was nationalised, the manor house itself was taken over by the local School of Agriculture, while the neighbouring former utility buildings were substantially remodelled and adapted to serve as the school’s auxiliary facilities. In 2014, the manor house underwent a comprehensive restoration combined with specialist renovation and conservation works. The building received a new moisture proofing system, while the exterior plasterwork was partially replaced. The roof truss and cladding were also refurbished. The period features of the building, including the glazed roof tiles, exterior plasterwork, window and door joinery as well as architectural detailing were all meticulously recreated. Inside, the entire project was implemented with a single goal in mind - to preserve the existing period features to the fullest possible extent. The beamed ceiling on the first floor was reinforced, most of the post-war tiled floors and parquet floors were removed, allowing for the authentic oakwood mosaic flooring surviving in a few of the interiors to be put on display once again. The entrance hall is graced by the original, 19th-century terrazzo flooring, while pieces of surviving terracotta floors from the same period were meticulously salvaged and incorporated into the modern flooring in the hallways of the building. The historic wooden doors as well as the few surviving exterior window shutters were likewise secured against further damage and restored to their former glory. A number of surviving portals and door surrounds made of sandstone, dating back to the 17th century, were likewise subjected to the necessary conservation works, as were the main staircase and all of the preserved 19th-century fireplace surrounds and tiled stoves.

The partially levelled ramparts surviving in the park are the vestiges of a system of early modern fortifications, designed on a roughly square plan and consisting of earthen ramparts reinforced by a wall on the inner side and surrounded by a moat. Today, all that remains of the system of fortifications is the north-eastern curtain wall and the adjoining northern and eastern bastions, the western bastion accompanied by remnants of the north-western curtain wall, fragment of the south-eastern curtain wall and the southern bastion as well as traces of the moat, most readily apparent on the south-western side of the complex.

The complex is situated in the south-eastern part of Łodygowice, at the intersection of Jadwigi and Podzamcze streets, south-west of the Żylica stream, in the immediate vicinity of the church of St Simon and St Judas Thaddeus.

The manor house is situated deep within the surrounding landscape park of limited size, its outer boundaries marked by the remnants of the earthen rampart - traces of a system of early modern fortifications.

The manor house itself is made of stone, its walls covered with plaster. Designed on an elongated rectangular floor plan adjoined by a short northern wing, the manor house features a typical, symmetrical two-storey silhouette with a tall hip roof, its appearance enlivened through the addition of axially arranged, short avant-corps as well as a grand Gothic Revival portico with a terrace up front. The building also features a cellar.

The interior follows a 17th-century, symmetrical two-bay layout with an enfilade arrangement of rooms, a spacious vestibule and grand staircase. A large entrance vestibule at the ground-floor level, in the central section of the house, features an axially positioned, representational staircase with a single flight of steps in its lower sections and two separate flights of steps in the upper part thereof. The vestibule is flanked by four rooms on each side, with all of the rooms on the eastern side featuring the surviving original vaulted ceiling of the barrel type, with lunettes. The interior layout of the northern wing was modified at a later date and incorporates a second staircase leading to the first floor. The first-floor interior layout is virtually the same as that of the ground-floor level. In the middle of the northern suite of rooms there is a spacious hallway accessible from the staircase and surrounding it from three sides, with a series of arches separating the staircase itself and the hallway space. The northern part of the hallway and the staircase are both illuminated by a skylight. Some of the original fixtures and fittings added during the successive stages of transformation of the building have survived to the present day, including the Late Renaissance stone portals as well as the 19th-century wooden doors, flooring, stained glass windows and fireplace surrounds.

The walls of the individual façades of the manor house are slightly thicker at the base to provide the necessary reinforcement without resorting to the use of pronounced buttresses. The overall design of the façades is relatively regular and features a restrained use of architectural detailing, including mostly Gothic Revival window surrounds, stepped gable copings and a number of friezes. The south-western (front) façade is the grandest of all, featuring a central avant-corps with a representational entrance framed with a pointed-arch stone portal flanked by a pair of similarly disposed windows and preceded by a three-axial arcaded portico topped with a decorative balustrade incorporating a Gothic quatrefoil motif arranged using both stone and ceramic elements. The upper section of the avant-corps is accentuated by three windows topped with shouldered flat arches, above which rises the decorative stepped gable flanked by a pair of overhanging bartisans. Traces of sgraffito decoration have been preserved on the rear façade and the corners of the northern avant-corps, incorporating a motif of square faux quoins with decorative bossage.

The historic monument is accessible to visitors. The building is presently used, among others, as the local Chamber of Tradition.

compiled by Agnieszka Olczyk, Regional Branch of the National Heritage Board of Poland in Katowice, 19-03-2015. 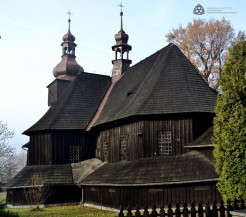 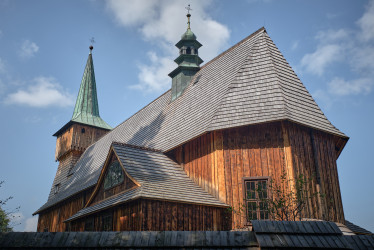 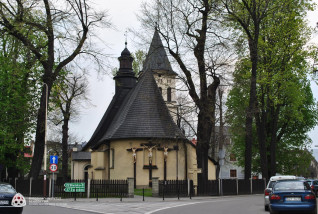 Filial church of the Holy Cross 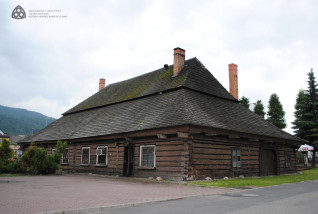 The church of the Nativity of the Blessed Virgin Mary 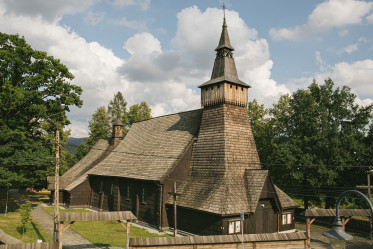 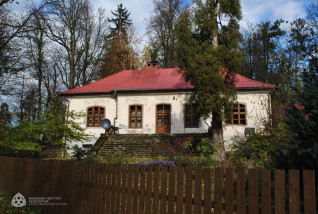 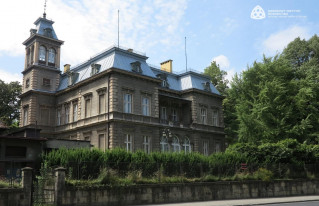 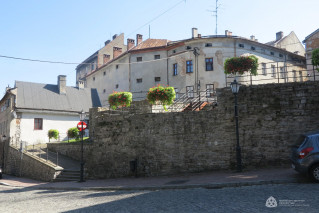