A unique example (not only in the region) of an arranged axial spatial residential complex, fully preserved and including a palace and park complex, a patronage church, a large manor farm, and a manor farm village.

Initially a Prussian settlement, then a rent village with a knight estate operating nearby, chartered as early as in 1281 (re-chartered in 1431). Among the numerous owners of the estate, there was, among others, the von Borck family that owned it in years 1571-1681, and the von Barfuss family in whose times the present palace was probably built (literature on the subject matter indicates 1740 as the construction completion date). In 1741, the von Barfuss family transferred the complex under a will to four heirs, and the estate was finally taken over by one of them, Filip Otto von Doenhoff, as a result of conciliation. Because Filip Otto and his wife Amalia nee Dohna-Schlodien did not have any heirs, they decided to transform the estate into a "foundation for the poor". The date of establishment of the foundation is not known for sure — two dates are provided 1771 and 1786 — what is known, however, is that from the establishment of the foundation, the estate including Kwitajny and 9 smaller localities was under supervision of a keeper from the Doenhoff family from Friedrichstein, which held patronage also over the church. The aim of the foundation was to build and maintain a hospital and a lazaretto. It is not known where the first hospital building was located and how it looked like in the 18th century. What is known, however, is that in the 19th century, a hospital building, a house for a doctor, and a house for a nurse were built in the village. The buildings survived until today, and it is also known that there were also a fiscal office of the foundation, a post office, a school, and a forest inspector's house in the village. Nearby the palace, in the 40s or 50s of the 19th century, a sizeable building was erected, referred to today as orangery, which — at least in part — was used as a lazaretto or hospital. Around mid-19th century, probably before 1839 (such date is inscribed on the staircase platform), the late-Baroque palace was slightly modernised (with neo-Renaissance elements of Berlin origin, particularly visible on the façade, and neo-Gothic elements in the section of external stairs or the bridge over ponds). A regular Baroque garden was transformed into an extensive landscape park, and the manor farm complex was significantly extended, in the early 20th century, a new semi-detached houses for servants were built on both sides of the road to Pasłęk. The last administrator of Kwitajny before 1945 was countess Marion Doenhoff, after the World War II a co-founder of Die Zeit in Germany, a great supporter of Polish-German reconciliation. After the war, the palace and local buildings belonged to an agricultural school, then to a State Agricultural Farm (PGR) and the Agriculture Property Agency of the State Treasury (AWRSP), and currently, it is a state property. The permanent architectural décor which survived the war, dilapidated in the post-war period, and lavish movable fittings of the palace was to a significant extent plundered just after the war. Some preserved paintings and other items are stored in the collections of the Museum of Warmia and Mazury.

The complex is situated by the Morąg-Pasłęk route, 12 km to the east from Pasłęk, surrounded by water catchment areas of the river Sała. The complex includes clearly separated parts divided by a road and water system — the residential part in the south-eastern section of the complex, separated from the village and manor farm with ponds, the parish part with a church, church buildings and school in the north-eastern part of the complex, manor farm buildings with two farming yards and an administrator's house with a small park in the south-western section, and the village with foundation buildings and semi-detached houses for servants in the south-western part of the complex. The palace is late-Baroque in style, and it was slightly converted in mid-19th century. It is made of brick, plastered, and built on a floor plan of an elongated rectangle, features two storeys, and is covered with a hip roof laid with sheet metal, with shallow avant-corps on the axis, and an 11-axis façade (4+3+4), divided by cornices; the internal layout features two-bay and two-and-a-half-bay divisions, with a hall and a drawing room on the axis (first floor). The palace is surrounded by a landscape park with an area of more than 17 ha, which was created on the basis of a transformed Baroque garden. The composition is based on the main Baroque axis with landscape solutions — an oval forecourt, a network of free-running park alleys, and an extensive water system (3 ponds and channels in the park, with an area of ca. 1.5 ha), valuable old-growth trees, neo-Gothic bridge, and the monument of the fallen in the World War I. The outline of a regular crop garden is visible. The park composition also includes a church originating from the 18th century. The whole complex is related — in terms of landscape — with the man-made landscape of within the extensive estate. A manor farm was built on a floor plan of a quadrangle, with brick and stone farming buildings from three sides of the yard and an administrator's house from the fourth side, situated on the southern side of a great pond located in the village centre. On the western and northern part of the pond, there is a complex of buildings of the foundation and residential and farming buildings of the estate workers, made of red ceramic brick.

Limited access The structures are mostly accessible from the outside. 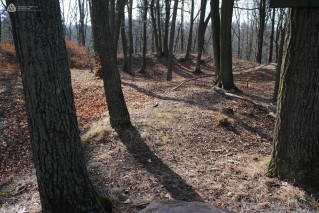 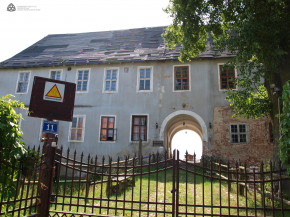 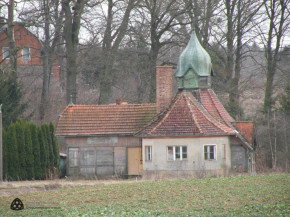 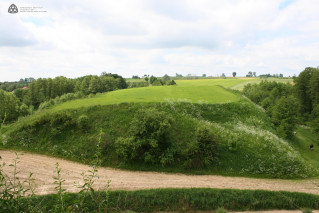 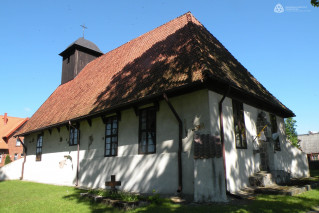 Church of the Triumph of the Cross in Kanigowo 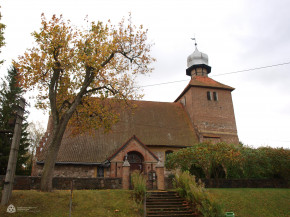