The church of Our Lady of Ascension in Kościan is the only Gothic parish church in Greater Poland which features a complete row of chapels. The church bears testimony to the historical continuity of the town, having witnessed both the times of prosperity, when the wealthy burghers funded chapels and altars which can still be seen today inside the parish church, and the times of decline. All this also shows that the local religious life continued without interruption through all those years.

Today, the parish church in Kościan boasts the greatest collection of Late Gothic paintings in the area, although fine examples of Renaissance and Baroque art can be admired there as well. All of the surviving fixtures and fittings have been installed following the fire which engulfed the church back in 1503, with the main altarpiece created by an anonymous master from Gościeszowice being of particular value.

The parish of Our Lady of Ascension was the first parish to be established in Kościan. The first church to be erected here was most likely a single-nave structure which was constructed in the second half of the 13th century. The first mention of the local parish priest dates back to this period (or to 1289, to be precise). Subsequent construction works were carried out here following the siege and conquest of the town in 1332 by Casimir the Great, who later went on to claim the kingship of the Poles. From the mid-14th century onwards, the church remained under the management of the community of St John of Jerusalem in Poznań, with the commander of the Knights Hospitaller performing the role of the parish priest. The first recorded parish priest of was commander Jan; the Knights Hospitaller remained in charge of the parish church in Kościan until the mid-16th century, when the church was taken over by the priests of the local diocese. The three-nave corps the logis of the current church was most likely erected in the first half of the 14th century; construction is traditionally said to have begun in 1333, although the chancel was a single-bay structure at the time and would only be extended at a slightly later date. Throughout the 15th century and in the early 16th century, a row of chapels was added to the body of the church, funded by various fraternities and guilds. In 1547, the tower was lost to the blaze but was then rebuilt in 1594; unfortunately, the tower has collapsed in 1711 as a result of hurricane winds and was never rebuilt in its original form, with the current structure only reaching up to the height of the walls of the main body of the building. Following the great fire which swept across the town in 150, the proceeds from the sale of timber from the local forest were allocated to the reconstruction of the damaged church. It is believed that it was at that point that the chancel was extended and modified, with the new structure being a three-nave structure with a heptagonal termination. In addition, the church also received new ceilings throughout. The naves and the chapels were covered by a single gable roof.

Due to the pauperisation of the town and its residents in the second half of the 17th century as well as in the 18th century, no substantial changes were made to the temple in those times. In 1610, the parish church has six chapels and eleven altars in total. In 1864, the floors of the church were replaced. In years 1892-6, the church underwent a comprehensive restoration, including the partial reconstruction of its vaulted ceilings and modification of its pillars. After World War II, in 1949, the interior received painted decorations executed by Wiktor Gosieniecki from Poznań.

The church of Our Lady of Ascension is situated in an open area, on an irregular plot of land located south of the market square. The church, designed in the Gothic style, is oriented on the east-west axis. It is a brick structure designed on an irregular rectangular floor plan with an irregular heptagonal termination in the east, its walls featuring both the Gothic (Polish) and monk bond. The church features a low, quadrangular tower in its western section, with the narthex being located on the ground floor level thereof. The corps de logis of the church follows a four-bay layout with exceptionally narrow side naves and features rows of chapels positioned alongside the side naves. These chapels are of varying height and depth, with most of them being designed on an almost-rectangular floor plan. There are no chapels alongside the third bay from the west - these are replaced with porches (the rectangular northern porch and the trapezium-shaped southern porch), both with chapels on the first-floor level. A four-bay chancel with a heptagonal termination is located at the eastern end of the church, its main nave being slightly wider than the main nave of the corps de logis itself. The width of the chancel along with its side naves is almost identical to the width of the main nave, the side naves and the chapels combined. The sacristy with the chapel of St Anne on the first floor is incorporated into two of the western bays of the northern nave of the chancel. Inside, the main nave opens up to the side naves in a series of pointed-arch, stepped and moulded arcades resting on slender pillars; the pillars in the nave are square in shape, while their counterparts in the chancel are rectangular. The chapels are connected to the side naves by pointed-arch openings of varying height. The church in Kościan features a few different types of vaulting; a relatively rare type of rib vaulting known as lierne vault is used for the main nave, the chapel of St Anne and one bay of the chancel, with the rest of the chancel featuring stellar vaulting, as do the side naves and one of the chapels. Other sections of the church features cross-rib vaulting and barrel vaulting. The ribs of the vaults inside the naves flow into shafts superimposed onto lesenes adorned with cornices. The vault ribs in the side naves rest upon corbels.

The large size of the chancel resulted in the rood arch being positioned in the middle of the temple’s length. The Baroque rood beam from 1734 supports a Late Gothic group of sculptures depicting the Passion of Christ, created in the first quarter of the 16th century; unusually, the group consists of five persons - Christ upon the Cross, the Virgin Mary of Sorrows, St John, the kneeling Mary Magdalene, Longinus and Stephaton. The Baroque choir gallery, built around 1730-40, is embedded between the piers in the western part of the main nave and of the northern side nave; the gallery, with a slightly convex middle section and concave side sections, is supported by two pairs of semicircular arches; both the areas around the arches themselves and the balustrade are adorned with decorative Regency plasterwork. Outside, the walls of the church are supported by stepped buttresses of varying shapes and sizes. Both the buttresses and the walls bear the signs of subsequent alterations. The windows are rectangular in shape, topped with either pointed or semi-circular arches; some windows bear signs of subsequent alterations. The low, gable roof of the church covers the entire structure and is clad with roof tiles. The tower has only survived up to the height of the walls of the church itself; featuring buttresses on its corners, the tower is covered with a gable roof clad with roof tiles. The tower incorporates a Gothic Revival portal in which bricks bearing the dates 1547 and 1892 can be found. The surviving profiled Gothic portals are in the shape of a pointed arch.

Apart from the original architectural features, another notable characteristic of the church in Kościan is its lavish interior decor. The most valuable of all fixtures and fittings is the Late Gothic altarpiece of the Descent of the Holy Spirit dating back to 1507 (date inscribed on the plinth of the sculpture of the Virgin Mary), created at the Żagań workshop of the so-called Master of Gościeszowice. The altarpiece is positioned next to the pulpit. Originally designed as a polyptych, it has only survived to our times in the form of a triptych. The cabinet-shaped reredos takes the form of a triptych with central section incorporating a relief depicting the Descent of the Holy Spirit. Other decorations on the altar portray various scenes from the life of Jesus and Mary. When closed, the dimensions of the altar cabinet are 170 x 120 centimetres. The paintings incorporated into the folding wings of the reredos depict various scenes of the Passion of Christ. The altarpiece is made of pinewood. The same material is used for the panels behind the paintings. The sculptures, on the other hand, are made of limewood. The main section of the altarpiece incorporates a carved scene of the Descent of the Holy Spirit. The wings of the reredos, painted on both sides, portray various scenes from the life of Jesus Christ. The predella of the altarpiece, crowned with foliate ornamentation, incorporates hermas depicting St Catherine, St Barbara, St Dorothy and St Margaret. When closed, the dimensions of the reredos are 170 x 120 centimetres. The altarpiece is made of pinewood, while the sculptures were executed in limewood. Another valuable piece is the Late Renaissance main altar, created in 1620 owing to the funds contributing by the altarists of Kościan; it was subsequently restored in years 1896-7. This massive, three-storey altarpiece features lavish carved decorations. The middle section of the altarpiece incorporates an earlier, Late Gothic triptych with a sculpture of the Virgin Mary with Child in the vein of the so-called beautiful Madonnas, positioned in the centre of the reredos. Another interesting altarpiece can be found in the chapel of St Anne on the first floor above the sacristy. This Late Renaissance altarpiece, dating back to about 1625, incorporates an earlier, Late Gothic sculpture, relatively small in size - a rather rare depiction of St Anne with the Virgin Mary and Child Jesus. Another significant part of the fixtures and fittings of the church in Kościan are the antique headstones. The most valuable of those headstones was made in Cracow, at the sculptor’s workshop owned by an Italian named Santo Gucci; this two-level, double headstone of Maciej and Jadwiga Opaliński, made at the behest of their son, Andrzej, the grand Marshal of the Crown and the general alderman of Greater Poland, somewhere around 1590. Another unique item is the gravestone created in 1647 to commemorate the daughters of the municipal registrar, Paweł Krusiewicz. The plaque incorporates depictions of both maidens - Zosia and Ania - portrayed as infants wrapped tightly in their swaddling clothes.

compiled by Regional Branch of the National Heritage Board of Poland in Poznan, 23.11.2014. 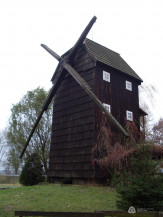 Post mill, currently serving as a sculpture and painting gallery 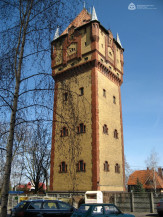 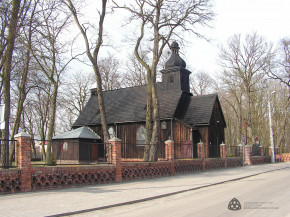 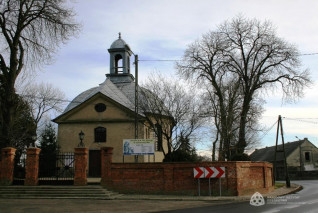 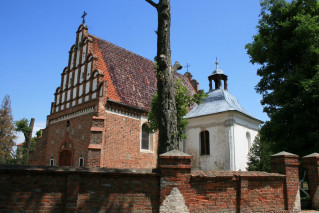 The church of ST Peter and Paul 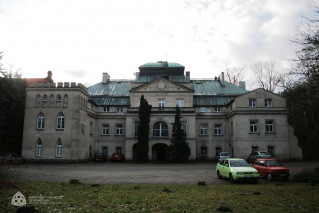 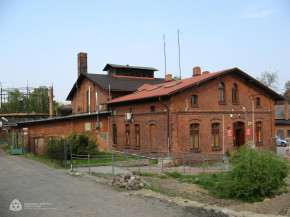 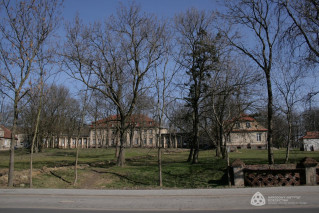 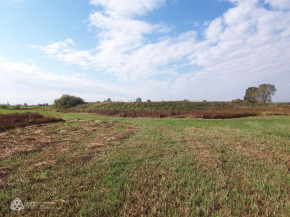