An example of a village church of a kind once prevalent in the territory of the Warmia dominion, the church has been modified and extended on numerous occasions. As a result, the building now incorporates late Gothic, early modern and historicist elements, the latter designed by the architect Fritz Heitmann. Another notable feature of the church are its interior fittings.

The foundation document of the village, dating back to 1345, also contains a mention of the foundation of the church, initially known as the church of St John the Baptist. The eastern part of the church originates from around the 1st quarter of the 16th century, featuring a lavishly designed gable. Bishop Marcin Kromer consecrated the temple in 1580. The original Gothic fittings, mentioned in the archives and other documents (“altare antiquus” from the register dated 1672) have not been preserved. Following the works carried out in years 1707-1709 by Florianus Bähr, the local parish priest, the suffragan bishop John Kurdwanowski consecrated the church on 14 June 1715; at that point, the church was known as the church of St John the Baptist and St Roch. The original structure, featuring a single-nave, aiseless layout (as evidenced by the preserved corner buttresses) was subsequently extended through the addition of two aisles. In 1789, bishop Ignacy Krasicki consecrated the church once again. By this time, a brick tower has replaced the original wooden structure; the cupola roof of the new tower originates from 1787. A substantial extension of the temple took place in years 1911-1912 (following the completion of extension works, the church was consecrated during a patronal feast on 24 June 1912 by bishop Augustyn Bludau). The original body of the church was incorporated into the new, extended section. The design for the extended church was created by Fritz Heitmann, a well-known architect from Königsberg, the author of many ecclesiastical building designs, some of which were also connected with historic buildings. In years 1739-1740, the Brotherhood of Saint Roch, one of the Fourteen Holy Helpers and a saint often invoked against the plague, was established at the church. The interior fittings include numerous works dedicated to the vibrant and lasting devotion to the saint, e.g. the Baroque image in the main altar (a work of considerable artistic value), numerous sculptures of the saint (originating both from the Baroque period and from the end of the 19th century) and an oil painting funded by Johann Gendrilk from Mątki and signed in 1831 by Johann Rudtkowski from Dobre Miasto, the latter being a fine example of a work of art created by a local artist. After the extension which took place in the 20th century, the Baroque fittings (including the main altar from around 1715, sculptural decorations probably executed by Izaak Ryga from Königsberg, the ambo) were preserved, with the new, historicist interior decor being designed to match the original fittings in terms of appearance (the paintings on the vaulting executed by Ferdynand Busch in 1914, combining neo-Gothic and neo-Baroque forms) and were supplemented by additional works that followed the principles of eclecticism or academic art, e.g. the set of stained glass windows from the workshop of Binsfeld from Trewir, altars by the chancel (the so-called purgatory altar and rosary altar, both incorporating an elaborate imagery).

The church is located on the northern side of the road, in the centre of the village. It combines two sections – the original, oriented aiseless church with an aisle from the 18th century and the later section, positioned perpendicularly towards it, built in years 1911-1912. The older section of the church is integrated with the new floor plan and structure. The church was built on a floor plan the shape of which approximates that of a square, with an annex adjoining the eastern facade and a tower, built on a square floor plan with rounded corners positioned adjacent to the western facade, the said arrangement lending the entire shape an air of symmetry. The chancel, narrower than the rest of the church, faces north, although its axis deviates slightly towards the west. The southern part of the layout incorporates the original church. On the diagonal axis of the original church, a new wing of the choir gallery was added from south, the walls of the wing (with staircases inside) transecting the former aisle. A new vestibule was built in the western part of the nave. The original church, featuring an aiseless layout, forms the first bay of the three-nave, three-bay structure of the extended church. The elongated chancel features a rectangular end section. The individual constituent parts of the church are easily discernible, especially in the southern part thereof, there the wing incorporating the new organ gallery transects the original basilica church at a right angle. The presbytery is lower than the main body of the church. Individual sections of the church are covered with gable roofs; the former aisle features a shed roof, while the chancel is topped with a three-sided roof. External facades are made of brick, partially covered with plaster; the church stands on a foundation made of split stone; roofs covered with ceramic roof tiles. The facade of the redesigned southern section features an impressive, highly decorative design, with stone used in certain sections of the facade on two levels; a large anvil incorporated into the eastern part of the wall carries the inscribed date 1911. Other southern facades of the church are covered with plaster. The eastern wall of the original church is crowned with a triangular gable divided along the axis by an embedded cylindrical turret, flanked by angular pinnacles positioned on the sides of the gable. The panels between the pinnacles and the turret incorporate blind windows topped with ogee arches, each of them featuring an additional pair of ornamental arches positioned underneath the main ogee arch, supported by a small corbel in the centre. These forms are repeated in the gable in rich southern facade, additionally divided by belt cornices. The southern facade of the original church features preserved windows topped with segmental arches, showing the signs of alteration works performed during the early modern period. The facades of the new main body and chancel are accentuated in a manner analogous to the architecture of the older part of the church by windows topped with segmental and round arches, incorporated into large blind windows topped with ogee arches. The rear wall of the chancel is adorned with a row of blind windows of a similar design as well as by cornices and further blind windows, their inner surface covered with plaster. A door at the ground floor level leads into the tower; the upper storey is adorned with small windows and pointed-arch blind windows. The facades of the tower are divided by brick cornices. The tower is topped with a cupola roof with a convexo-concave profile, crowned with a lantern; smaller lantern of a similar design crowns the cylindrical turret in the eastern gable. The interior of the church is divided into naves by pillars with rounded corners. The nave features faux cross-rib vaulting, with a lierne vault used for the chancel. The interior of the church contains a number of Baroque fittings, including the aforementioned main altar, the pulpit, the side altars inside the nave as well as a number of paintings: “The Teaching of the Virgin Mary”, “Our Lady of the Rosary” (in the presbytery), “Visitation of St Elisabeth”(?) above the entrance to the tower and “Michael the Archangel”. Another group of fittings and decorative features were introduced during the 1911-1912 extension works, e.g. the set of stained glass windows with figural motifs in the body of the church (“Vision of Saint Margaret Mary Alacoque”, “The Holy Family”, “St Adalbert”, “St Andrew”, “St Elisabeth of Thuringia”, “St Izydor”, “St Roch”, “St Dominic Receiving the Rosary”, “Stigmatization of St Francis”, “Moses receiving Decalogue boards”, “Expulsion from Paradise”, “St John the Baptist”) and the painting entitled “St Anthony Padewski”.

The church remains in use and is closed outside church service hours.

Compiled by Joanna Piotrowska, Regional Branch of the National Heritage Board of Poland in Olsztyn, 12.08.2014. 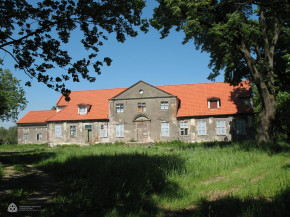 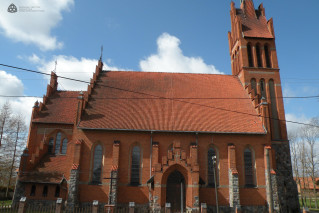 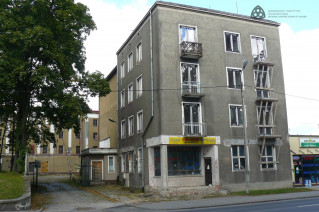 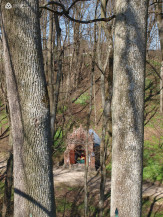 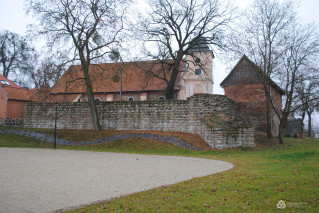 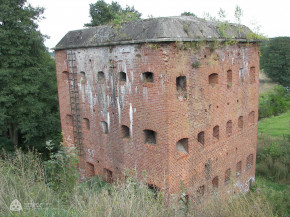 Defensive towers of the railway bridge over Pasłęka 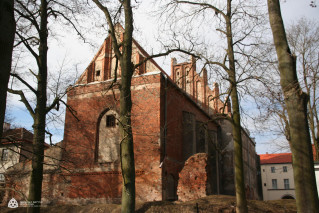 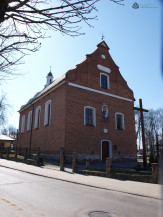 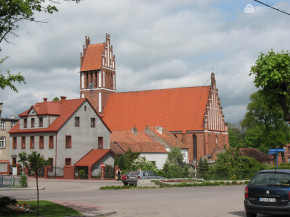 Church of St Bartholomew in Jeziorany