The palace in Gułtowy is an example of a Baroque-Classical residence, designed by the local architect Ignacy Graff for the renowned Bniński family from Greater Poland. Its design draws on other examples of architecture in the nearby area (Siedlec, Czerniejewo) and — to some extent — on the design of the Rogalin palace, one of the most impressive residences which existed in Greater Poland at that time. Its interior features the original decorative plasterwork from c. 1800. The palace is surrounded by a landscape park with elements of a formal design. In the park, there is an outbuilding designed by Ignacy Graff.

The village of Gułtowy was the property of the Grzymała family in the 14th and 15th centuries; then, from the early 16th century to the late 17th century, it was owned by the Gułtowski family of the Leszczyc coat of arms. In the late 17th and early 18th century, the village was owned by the Łukomski and Sobocki families, then — by the Skaławski and Słucki families, and starting from 1776 — by the Bniński family. Gułtowy was temporarily owned by the Ostrowski family, but in 1862, it returned to the Bniński family. The last owner of the village before the war was Adolf Rafał Bniński, the province governor (voivode) of Poznań.

Written records from 1772 mention a dilapidated wooden manor house in Gułtowy. The present palace, incorporating elements of the Baroque and classical styles, was erected in the years 1779-1785, which was an initiative by Ignacy Bniński, the head (starosta) of the Środa District. The construction works, led by Wawrzyniec Richter from Poznań, began in the spring of 1780; the architect remains unknown. The founder of the palace was dissatisfied with the way in which the works were conducted and in the autumn of the same year, he entrusted the supervision of the project to Ignacy Graff, the court architect of the Sułkowski family from Rydzyna. It was Graff who shaped the final appearance of the residence. Following the departure of Graff, the project was completed by Wawrzyniec Richter and Józef Rossa, an architect from Gniezno. The interiors were decorated by Walentyn Merck (plasterer) and Karol Brożyński from Środa Wielkopolska (woodcarver), among others. The interior decorations were completed in c. 1790. The park surrounding the residence was established at the same time as the palace. The palace became the residence of Ignacy Bniński’s son, Aleksander. Around 1800, further works on the interior were undertaken. The wall painting in the great hall inside the west avant-corps was, made by Antoni Smuglewicz, comes from that period. It was also then that the decorative plasterwork inside the marble room and the green room and the figural supraportes in the hall were made. Major works were also carried out in the late 19th century; for instance, the palace façades were redecorated. The lavishly decorated Baroque Revival staircase and wainscoting in the hall come from that period.

During World War II, the estate was confiscated by the Germans. The palace suffered extensive damage in 1945, when it was plundered by the advancing Red Army. After the war, the buildings were used by a State Agricultural Farm (PGR) and then by a PGR Combine. The palace underwent restoration in the years 1968-1974. In June 1995, a notarial deed was signed under which the State Treasury Agricultural Property Agency handed the palace and park complex over to the Adam Mickiewicz University in Poznań. Another deed, signed by Wacław Bniński on behalf of a daughter of the last owner of the estate, stated that the acquisition of the palace by the University is consistent with the intentions of the donor — Maria Bnińska. Restoration works on the palace were commenced in 2008. In 2009, the building was damaged by fire, but was soon restored.

The palace and park complex is located north-east of the village, away from other residential buildings, separated from them with a vast park. Its front façade faces the south. In front of the building, there is an elevated ramp with cast iron railings; further, there is a pond. In the park, there is an outbuilding designed by Ignacy Graff and built in c. 1780; originally, it was used as a stable and a servants’ house.

The palace was built on a rectangular floor plan, with a pair of rectangular avant-corpses on the east and west sides; they protrude from the wall only a little on the front side and more on the garden side. The palace also features two pseudo-avant-corpses, which hardly project out from the wall, on the south and north façades. The building has two storeys and a basement and is covered with interlocking hip roofs. The ground floor, more elegant, is higher than the first floor, serving as a mezzanine. The central pseudo-avant-corps projecting out from the front façade is accentuated by a triangular pediment and a mansard roof.

The facades, decorated with stucco quoins at the corners, are divided by a broad string course and regularly spaced windows framed by profiled surrounds. The ground floor windows are rectangular and the first floor windows are square. The string course between the storeys is decorated with a meander motif. In front of the three-axis front façade, there is an elevated ramp. The main entrance to the palace, rectangular in shape and framed by a profiled surround, is located on the central axis of the building. The three-axis pseudo-avant-corps is crowned with a pediment incorporating the Łodzia coat of arms of the Bniński family, surrounded by panoply elements. The semicircular pediments crowning the side avant-corpses are decorated with panoply elements and shields with Gorgon heads. Two dormers with decorative, volute-shaped window surrounds project out from the roof above the cornice. The façade overlooking the garden is devoid of decoration. In the centre, there is a door opening with a profiled surround, leading to a small terrace and steps leading down to the park. The central pseudo-avant-corps is crowned with a triangular pediment. The side façades used to have five axes; currently, the west façade has four axes and the east façade has six axes.

The interior of the central section of the building have a two-bay layout. The avant-corps section on the west side houses a large dining room, two storeys high, which is also known as the ballroom or the reception room. The eastern section of the building has a three-bay layout. All the elegant ground floor rooms form an enfilade. In the central section of the front suite of rooms, there is a spacious hall and a staircase leading to the first floor. The suite of rooms closest to the garden includes two drawing rooms: the green and the marble room, as well as a bedroom. Residential and guest rooms are located in the eastern section of the palace and on the first floor.

The preserved elements of the original interior decor include the Baroque Revival stairs with their lavish sculptural decorations and the wainscoting in the hall and the decorative plasterwork in the green room and in the blue room. The wall paintings in the grand dining room, depicting columns with composite capitals, were painted over during the German occupation of Poland, however, they were successfully recreated during the most recent restoration works; so was the decorative ceiling plasterwork.

The section of the park in front of the palace has retained visible elements of a formal layout, with a pond situated on its central axis and avenues lined with chestnut trees on the east side. The north-western sections of the park were designed as a landscape park, with a meadow on the axis of the palace. In the north-eastern section, there are two ponds; one of them is lined with hornbeam trees. The park boasts many old trees, including poplars, oaks, chestnut trees, maples, ashes, and weeping willows.

Limited access to the historic monument. Currently, the House of Creative Work of the Adam Mickiewicz University operates on the premises of the palace and park complex. More information is available on the website: www.palace.amu.edu.pl.

compiled by Krzysztof Jodłowski, Regional Branch of the National Heritage Board of Poland in Poznan, 28-11-2014. 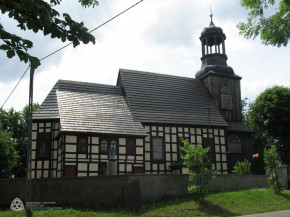 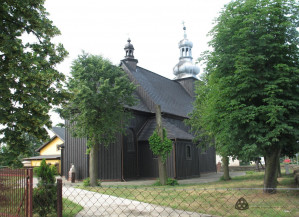 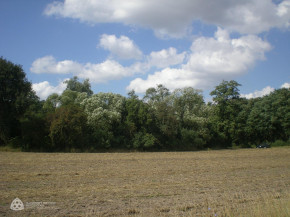 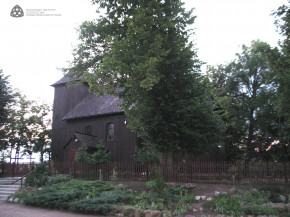 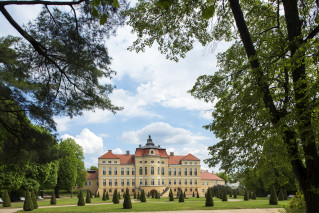 Rogalin – The Palace Complex with a Garden and a Park 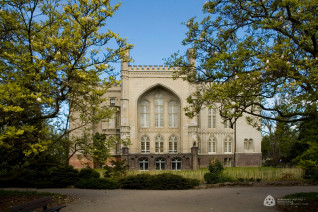 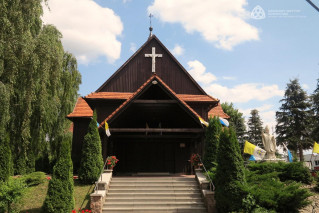 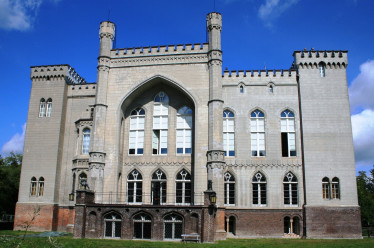 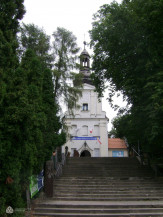