An example of a Renaissance church which subsequently underwent a subtle Baroque redesign. The Baroque painted decorations which grace the organ loft and side galleries are the unquestionable highlight of its interior today due to their excellent state of preservation and their outstanding artistic value.

The first church in Domaszków was erected before the year 1560, followed by a masonry church in 1563. During the period of the Reformation, the church came into the hands of the Protestant community and was reclaimed by the Catholics after the year 1623. In years 1682-1683, the church was redesigned in the Baroque style, its new appearance clearly influenced by Bohemian architecture. It was at that point that the church received a new vaulted ceiling inside the chance, a new flat ceiling above the nave as well as an organ loft and side galleries as well as a common roof rising above both the nave and the chancel. The current arrangement of its axes of symmetry and window openings originates from this very period, as does the two-storey chancel annex containing the sacristy and the patrons’ gallery on the first floor. Further construction works were conducted in the second half of the 18th century, with the changes being made at that point being very much in the spirit of full-fledged or late Baroque, with traditionalist influences being clearly evident. The tower was extended upwards, with the corners of its uppermost storey now being truncated and concave in shape. The northern chancel annex received new window surrounds, while inside the church the existing wooden organ loft and side galleries were constructed. It was most likely also at that point that the decorative painted decorations adorning the underside of the organ loft and galleries was created, consisting of a two-tone acanthus scroll. In 1801, the flat ceiling of the nave, clad with wooden boards, was replaced with a new ceiling with a crown moulding, adorned with painted Biblical scenes created by a painter named Wäse (Wehse), based in Kłodzko. He also decorated the organ loft parapets, which now boasted a faux marble look, as well as the parapets of the side galleries, the latter being adorned with compositions made up of foliate motifs. In the 19th century, the painted decorations which adorned the ceiling of the nave were painted over. The decorations which graced the underside of the organ loft and galleries as well as the parapets running along their edges, on the other hand, were meticulously renovated. In the years 1924-1926, the painted decorations were restored using the stencilling technique by Reinisch, a painter from Lądek. In 1934, the painted decorations of the nave ceiling, executed by Wehse back in the early 19th century, were brought to light once again, as were the relics of painted decorations on the chancel walls. The evaluation of the rediscovered remnants of polychrome decorations was conducted by a painter named Drobeck, who acted at the express request of the ministry in Berlin. The task of restoring the painted decorations gracing the ceiling, the organ loft and the side galleries fell upon Alfred Schneider from Wrocław, a painter and art restorer, who completed his work in 1935. It was also during that period (or between 1934 and 1935, to be exact) that another painter, Leo Richter, restored the painted decorations inside the chancel as well as the fixtures and fittings of the church. In 1963, new painted decorations were added, designed by L. Krzemiński. A painting of the Apocalyptic Lamb now graced the vaulted ceiling above the chancel, while another scene, depicting the Holy Trinity surrounded by angels, enlivened the surface of the nave ceiling.

The church in Domaszków, oriented towards the east, is located in the middle of the village, at the levelled top of a slight elevation. It is surrounded by a cemetery circumscribed with a stone wall with a Baroque gate dating back to 1727. A Baroque sculpture depicting the Immaculate Conception, dating back to the first half of the 18th century, is positioned next to the gate. The chancel, with its semi-hexagonal end section, appears to be an almost integral part of the church; inside, it features a barrel vault with lunettes. The main body of the church is an aisleless structure containing the nave with a flat ceiling adorned with a crown moulding. Both the chancel and the nave feature a common roof. A four-storey tower adjoins the western side of the church, its uppermost section featuring concave corners. The tower is crowned with a cupola which features a roof lantern at the top. The rather restrained façades of the church are enlivened by the presence of Baroque stone detailing, stone portals, window surrounds framing a number of windows as well as Baroque stone urns that grace the corners of the tower. In addition, the tower façade is adorned with a Renaissance surround made of stone, featuring chamfered edges and an ashlar stone bearing the date 1563. The main decorative feature of the nave is the painted, wooden organ loft with a balcony as well as the side galleries supported by timber posts, their shape typical of the wooden architecture of the period. The marbleized, wooden organ loft balustrade on the other hand clearly strives to achieve a quintessentially Baroque look, as do the painted decorations on the underside of both the organ loft and the side galleries, consisting of an acanthus scroll in various shades of green and brown. The painted decorations which grace the side gallery parapets follow an arrangement derived from vernacular Baroque art (division into panels, floral ornamentation), albeit stylistically transformed. The monochrome painted decorations which adorn the balustrade of the stairs leading up to the gallery, consisting of rosette and acanthus motifs, are clearly Neoclassical in appearance. The fixtures and fittings of the church include the architectural altarpieces - the main altarpiece (1776), the side altarpiece dedicated to Child Jesus (1795), another side altarpiece devoted to St Anne (1795), the pulpit (1765), the ornate upper section of the baptismal font (1761), the pipe organ casing (1795) as well as the figures of St John of Nepomuk (1776) and Jesus Christ (late 18th century). All these items are designed in the Late Baroque style, with Rococo influences; their design is attributed to Michael Ignatz Klahr the Younger from Lądek.

The building is open to visitors all year round; interior tours upon prior telephone appointment.

compiled by Iwona Rybka-Ceglecka, Regional Branch of the National Heritage Board of Poland in Wrocław, 23-06-2015. 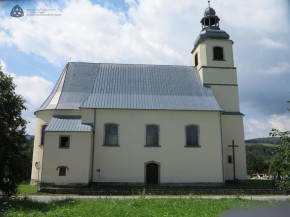 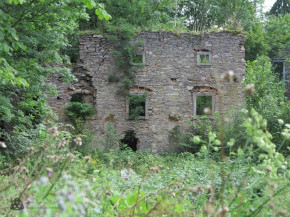 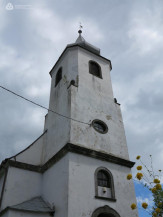 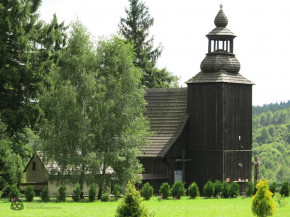 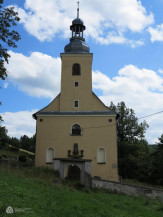 Filial Church of the Annunciation of the Blessed Virgin Mary 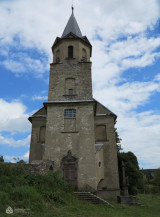 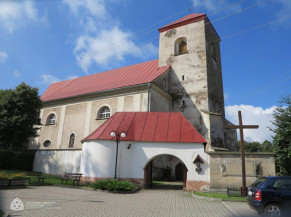 A fortified tower designed as a residence for the local knights, currently serving as a utility building accompanying the house no. 72