The church has an original floor plan approximating a Greek cross, which is the result of the construction of two chapels on the north and south sides of the nave.

The first wooden church in Bukówiec Górny, no longer existing, was built in 1270 and destroyed in 1383, when the village was raided by the Głogowski family. In 1400, another wooden church was erected. A parish-priest was mentioned for the first time in 1404 (the parish in Bukówiec Górny was probably established in the 14th century). In the 2nd half of the 16th century, no services were held in the church due to too small a number of worshippers. The parish was revived by Piotr Opaliński in 1596. The church survived the Swedish invasion of 1656. In 1733, the church roof, topped with a steeple, collapsed. After unsuccessful attempts at the reconstruction of the church, in 1737, Karol Opaliński of Bnin, the contemporary owner of Bukówiec, founded a new wooden church at that site. Only eight years later, the new building was replaced with another church, founded by Eleonora Jaraczewska, which was dismantled in the late 18th century. In 1797, the construction of a new, wattle-and-daub building was commenced. However, the project was abandoned due to the fact that the required permits could not be obtained and there were problems with providing building materials. The construction of a new church, this time made of brick and preserved to this day, was undertaken in 1825 by the residents of Bukówiec (it may have been founded by dukes from the Anhalt-Dessau family living in the nearby Włoszakowice). The construction works, which were not carried out continuously, were completed in 1845; in the same year, the church was dedicated to St Martin by the bishop Dąbrowski. At the same time, a double gate was erected on the north side of the church. A pipe casing was founded in 1890 and stained glass windows were founded in 1910. In 1914, the Germans stole two church bells. In 1930 or in 1932, two side chapels were built onto the north and south façades of the nave, forming a type of transept. The church floor plan now had a shape approximating that of a Greek cross. A sacristy was also built then on the south side of the chancel and a porch was constructed on the south side of the nave; moreover, two new window openings were made in the east wall of the chancel.

During World War II, at first, the church was open to Polish people. In 1941, it was closed to them. In 1942, the Germans again took the church bells away, and in 1943, they turned the church into a storehouse. Following the end of the war, in 1946, the priest-church returned to the parish and commenced renovation works on the damaged church. In the late 1940s, stairs were built in front of the gate leading to the church yard. In 1986, full-scale renovations were carried out, including the renovation of the roof trusses and the replacement of the roof covering. The wooden ceilings with counter ceilings were replaced with beamed ceilings. The structure of the steeple over the chancel was replaced. In 1990, the façades were covered with new plaster.

The church complex is located in the centre of the village, on the south side of the main road connecting Bukówiec with Włoszakowice (to the south-west) and Sądzia and Krzycko Wielkie (to the south-east). It borders the road on the north side; on the south side, it borders a number of utility buildings, on the west side — an unmade road, and on the east side — a cemetery. The church is situated on a small hill. It is enclosed with a brick wall (with its inner face plastered), which separates it from the road, on the north side, and a stone wall, behind which is the unmade road, on the west side. South of the church, there are a number of outbuildings. To the north-west, there is a bell tower. On the opposite side of the church, there are graves of the parish priests. East of the church, there is a parish cemetery separated from it by means of a hedge and a section of a stone wall. The broad stairs leading from the main gate in the northern section of the wall to the church and the church yard are paved with concrete flags.

The church, oriented to the east, has one nave. It has no distinct architectural style. It was originally built on a floor plan having the shape of an elongated rectangle, with a narrower square chancel on the east side. During church extension at a later time, two side chapels, roughly square in shapes, were built onto the north and south sides of the nave; they formed a type of transept and thus the church floor plan started resembling a Greek cross. A new sacristy, having the shape of an elongated rectangle, was added to the chancel on the south side. A rectangular porch was built onto the north façade of the nave, between its west part and the chapel.

The church has a complex structure made up of seven cuboidal parts, with a quasi-avant-corps on the front façade. The nave, the chancel, the chapels, and the old sacristy are covered with gable roofs of the same height; there is a steeple on the ridge over the chancel. The new sacristy is covered with a two-pitched roof. The porch has a flat ceiling.

The church walls, resting on a stone socle in the nave and chancel parts, are covered with plaster. The façades of the nave, the chancel, the old sacristy, and the chapels are crowned with a protruding, stair-shaped cornice with drainage skirt roofs covered with ceramic roof tiles. The walls of the old sacristy have rounded corners. The nave, the chancel, the side chapels, and the old sacristy are topped with triangular gables with single segmental-arched window openings in the centre, with the exception of the north gable, in which there is a niche with a sculpture of Mary the Mother of Poland. The north façade of the porch is divided by means of two lesenes flanking the door opening on the central axis and topped with a curved parapet with a cross. The church façades are divided by means of rectangular, round-arched window openings filled with stained glass. The frontal façade, resting on a stone socle, is topped with a triangular gable with a brick pinnacle, separated from the lower storey with a stair-shaped cornice with a drainage skirt roof. On the central axis of the lower storey, there is a quasi-avant-corps with a rectangular door opening headed by a segmental arch, over which there is a round-arched niche with a sculpture of Jesus Christ. On the central axis of the gable, there is a rectangular window opening, also headed by a segmental arch.

On the chancel façade, over the roof of the old sacristy, there is the church completion date — “1825”.

The church has one nave with two side chapels, forming the wings of a transept. The chancel is situated slightly higher in relation to the nave and separated from it with a stair. In the west part of the nave, there is a music choir on two wooden supports.

The church fittings include an eclectic main altar from the 2nd quarter of the 19th century with a Baroque painting from the 17th century, depicting Our Lady of the Snows, in the centre. The nave, the chancel, and the side chapels feature stained glass windows from the early 20th century.

In the northern section of the wall surrounding the church, there is a gate with three openings, made of brick and covered with plaster. Over the central opening, topped with a semi-circular arch, there is an elliptical niche with a sculpture of Jesus Christ, over which there is a Neo-Baroque attic with a cross on the central axis. The main gate opening is flanked by two pilasters. The two side openings are headed by segmental arches; the walls have curved tops.

The historic monument is open to visitors. More information about the parish, the Holy Mass schedule, and contact details can be found on the website:

compiled by Anna Dyszkant, Regional Branch of the National Heritage Board of Poland in Poznan, 24-11-2015. 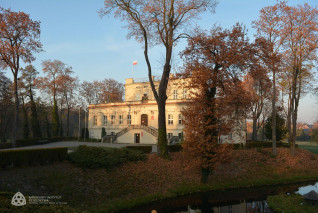 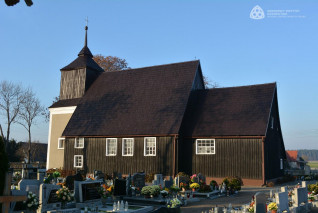 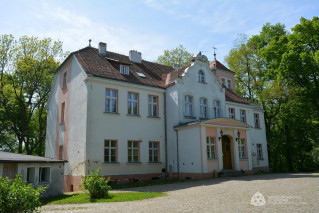 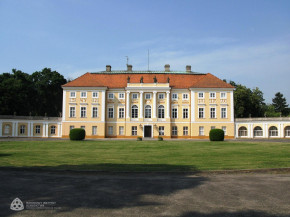 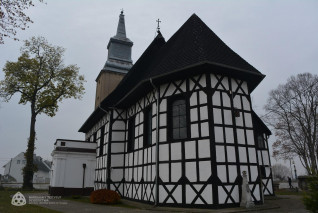 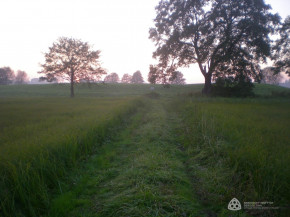 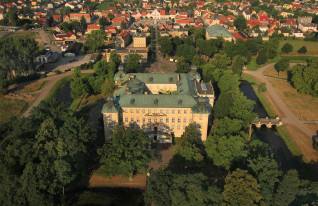 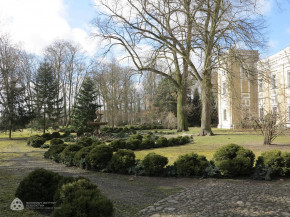