The palace in Arcugowo is an example of a residence built in the English Gothic Revival style; compared to other buildings of this type in Greater Poland, it was built relatively late. It is surrounded by a landscape park which has retained traces of an earlier, formal garden designed in the Italian style. On the south side of the palace, there is a chapel, built at a later date yet in a similar architectural style.

The original manor house in Arcugowo, extended and then redecorated in the English Gothic Revival style, was built around 1815 for Michał Rożnowski (of the Nowina coat of arms), who had owned the lands since 1803. It was a single-storeyed building having a rectangular floor plan; most likely, it also had a loft. Around the mid-19th century, Michał Rożnowski’s son, Dezydery, built a two-storeyed wing, having an elongated rectangular plan, onto the south side of and perpendicularly to the manor house.

In 1866, the manor became the property of Romuald Rzewuski of the Krzywda coat of arms, who after 1886 had the building modified and extended according to a design by an unknown architect, in the English Gothic Revival style. The structure of the original building was changed: another storey was added. A ballroom with a music gallery was built onto the north side and a tall tower was built in the north-east corner. The original, two-bay layout of the interior was preserved. The vestibule on the central axis of the building was modified: it now had the form of an impressive hall, two storeys high, with stairs leading to the first floor located on the south-east side.

During the first decade of the 20th century, a winter garden communicated with the ballroom was added on the north-west side of the palace.

After 1912, a chapel was built on the south side of the palace. Its floor plan approximated a square and its design resembled that of the palace itself.

In 1921, the estate was inherited by Romuald Rzewuski’s, Wacław, who remained its owner until 1939. During World War II, the palace was held by the Germans, and after the war, it was taken over by the State Treasury and handed over to the state agricultural holding along with all the surrounding lands. The palace, without proper care and maintenance, was gradually falling into ruin; as a result, a decision to demolish the palace was issued in the early 1960s, although fortunately it was never implemented. After 1963, the palace underwent full-scale renovations which, unfortunately, were only limited to the building structure, its facades, and architectural decorations.

Currently, both the palace and the park are privately owned.

The palace and park complex in Arcugowo is located in the south-western part of the village. It can be reached by an access road running to the south of the main road. The palace stands at the extension of that road; it faces the east. On the south side of the palace, there is a chapel. Both buildings are surrounded by an irregular landscape park enclosed with a brick wall. The way to the complex leads through the main gate located to the north of the manor (on its east side, there is an obelisk surmounted by a sculpture of the Blessed Virgin Mary, founded by Emilia Rożnowska née Przyłuska, wife of D. Rożnowski) and a small gate located to the south-east, providing access to the farmyard.

The palace is located in the eastern part of the park. Its current form is a result of two series of extension works carried out in c. 1848 and then after 1886, during which the original, single-storeyed manor house, built on a rectangular floor plan in 1815, underwent major modifications. The palace is a brick building with two storeys and an irregular shape approximating a rectangle. The body of the palace combines a variety of forms. The central part is covered with a hip roof and the north part has a flat roof. The palace comprises the original manor house, which around 1848 was extended to the south with a two-storeyed wing, projecting in front of the central façade in the form of avant-corpses on the west and east sides. The two-storeyed annex on the south-east side of the building, covered with a flat roof, was probably built at a later date, after 1912, at the time when the chapel was constructed. A square winter garden introduces an element of variation to the western part of the palace. The north facade features a bay window. At the north-east corner, there is a tall, octagonal tower. After 1886, an avant-corps with a monumental, two-storey arcaded portico was built onto the front facade, on its central axis; on the axis of the rear facade, there is a corresponding pseudo-avant-corps, accentuated by two octagonal turrets and adjoined by a single-storeyed porch, on whose roof there is a balcony accessible from the first floor level. With the exception of the south wing, all facades are crowned with a cornice with an arcaded frieze, topped with a crenellated parapet and overhanging octagonal turrets at the corners. In the lower section of the tower, which is located on the east side of the palace, there is a round-arched niche with a stone sculpture of Mary with Child.

The interior layout of the central part of the palace has two suites of rooms, with a vestibule positioned on the axis of the building. The only surviving original interior fixtures are the door woodwork and a coffer ceiling in one of the ground floor rooms.

On the south side of the palace, there is a Gothic Revival chapel, made of brick, built in 1912 on a roughly square floor plan. Its front facade faces the west. The principal elements of the exterior decorations follow the themes identifiable on the palace facades — arcaded friezes, a string course, and a roof parapet in the form of a crenellated parapet, as well as overhanging octagonal turrets at the building’s corners. A semicircular niche which most likely used to house a sculpture can be seen in the southern facade. On the first floor level, there is a balcony (built at a later time) communicating the chapel with the palace.

The palace is surrounded by a landscape park having an area of approximately 4 hectares, which replaced an earlier Italianate garden which was probably established around the second half of the 18th century and whose traces are still visible in the north-western part of the park. West of the palace, there is a mound — a tomb of the Rzewuski family.

Limited access to the site. Private property - the palace and the chapel can be visited from the outside. The park is open to the public.

compiled by Anna Dyszkant, Regional Branch of the National Heritage Board of Poland in Poznan, 7-10-2014. 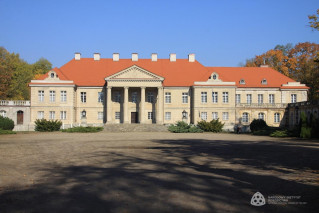 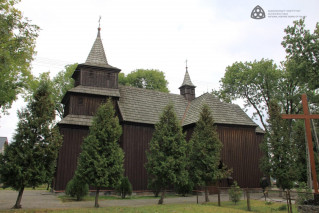 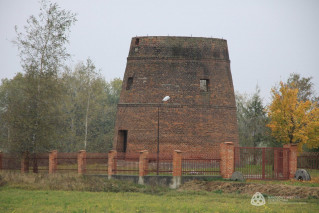 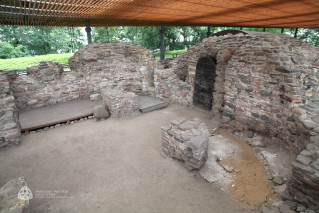 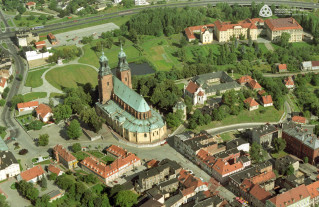 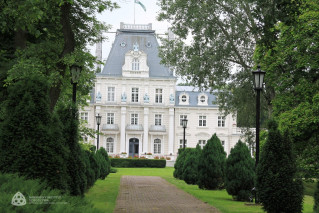 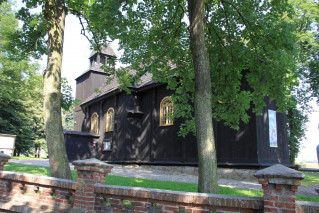 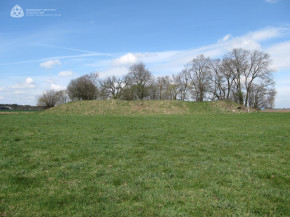 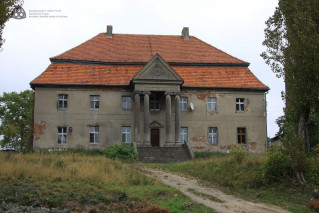